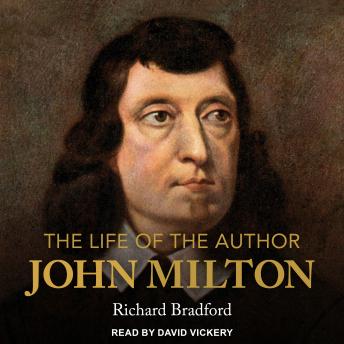 The Life of the Author: John Milton

It is hard to overstate the role that John Milton played in the historical, political, and literary controversies of seventeenth century England; his writings and very life challenged the status quo. Struggling to reconcile his private beliefs with his involvement with a radical political experiment, a republic which involved the killing of the monarch, his star rose and fell several times during his life. Married three times, struck blind at a cruelly early age, he was a famed pamphleteer and political activist whose revolutionary political credos placed him in mortal danger after the Restoration.

This fascinating new biography is divided into two parts. The first separates the man from the myth, and elucidates the complicated details of Milton's life from his early years as a literary artist uncertain of his destiny, through his work as a propagandist for the Cromwellian republic, to his rewriting of the Old Testament story of the Fall as a poetic allegory of more recent history. The second looks at how biographers and critics from the seventeenth century to the present day have distorted and manipulated the personality of Milton to suit their biases.

Life of the Author: John Milton