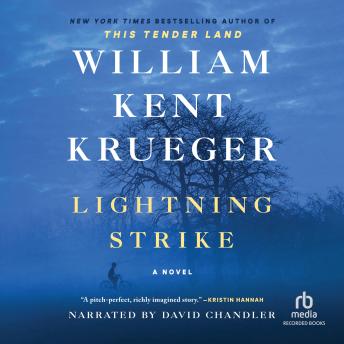 The New York Times bestselling author of This Tender Land returns with a powerful prequel to his acclaimed Cork O’Connor series—a book about fathers and sons, long-smoldering conflicts in a small Minnesota town, and the events
that echo through youth and shape our lives forever.

Aurora is a small town nestled in the ancient forest alongside the shores of Minnesota’s Iron Lake. In the summer of 1963, it is the whole world to twelveyear-old Cork O’Connor, its rhythms as familiar as his own heartbeat. But when
Cork stumbles upon the body of a man he revered hanging from a tree in an abandoned logging camp, it is the first in a series of events that will cause him to question everything he took for granted about his hometown, his family, and himself.

Cork’s father, Liam O’Connor, is Aurora’s sheriff, and it is his job to confirm that the man’s death was the result of suicide, as all the evidence suggests. In the shadow of his father’s official investigation, Cork begins to look for answers on his
own. Together, father and son face the ultimate test of choosing between what their heads tell them is true and what their hearts know is right.

In this masterful story of a young man and a town on the cusp of change, beloved novelist William Kent Krueger shows that some mysteries can be solved even as others surpass our understanding.

It’s the summer of 1963 in Aurora, Minnesota when Corcoran (Cork) O’Connor was 12-years old. He and friend Jorge were exploring an area around the Boundary Waters of Iron Lake when they came upon the area called Lightning Strike. To their horror, they discovered the remains of Big John Manydeeds, a man they both revered, hanging from a tree. Cork’s father, Liam, is the country sheriff who comes to the scene, which at first appearance looks to be a suicide. However, as Liam proceeds with the investigation, that preliminary assessment may have been premature. The case also highlights the divide within the community between the indigenous people and the white residents. I’m current in this series so to go back in time and learn more about who and what helped shape Cork O’Connor was a gift. For those who haven’t started the series, this is the perfect place to begin. Throughout the series, Cork has often reminisced about his parents but seemed especially impacted by his father. This story provides an excellent illustration of who Liam O’Connor was, his relationship with his son and his sense of justice. He’s sorely challenged as the pressures from all sides was awful. Despite it all, he stayed true to himself and the law. The tension was high from the onset and only intensified as the investigation progressed. What saddened me was how many of the cultural issues of that era haven’t improved much and are still manifesting themselves today. But what was heartening was the friendship between young Cork and his two friends, one a Latino and the other an Anishinaabe, who provide a primer for how to manage through difference. This is an incredible story with many, many layers, made even more wonderful by the outstanding narration of David Chandler. If you’re considering this series, please listen to the books because he elevates Krueger’s superior storytelling skills into the stratosphere. It’s one of my top ten series and this prequel put me in a very, very happy place.

I love the writing of Wm. Kent Krueger. Since I first discovered him I have read all the stories by him that I could find. Cork O’Connor is like a member of my extended family. I love how the rich, smooth voice of David Chandler brings his books to life. This book was no exception. I loved it.

I couldn’t stop listening to this book. It is an excellent heart warming story. I have enjoyed all the William Kent Krueger books. He is a gifted writer.