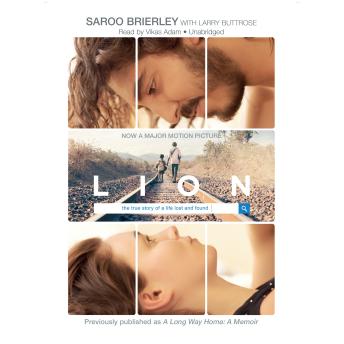 At only five years old, Saroo Brierley got lost on a train in India. Unable to read or write or recall the name of his hometown or even his own last name, he survived alone for weeks on the rough streets of Calcutta before ultimately being transferred to an agency and adopted by a couple in Australia.

Despite his gratitude, Brierley always wondered about his origins. Eventually, with the advent of Google Earth, he had the opportunity to look for the needle in a haystack he once called home and pore over satellite images for landmarks he might recognize or mathematical equations that might further narrow down the labyrinthine map of India. One day, after years of searching, he miraculously found what he was looking for and set off to find his family.

A media sensation, #1 international bestseller, and now an Academy Award–nominated motion picture, Lion is a moving, poignant, and inspirational true story of survival and triumph against incredible odds. It celebrates the importance of never letting go of what drives the human spirit: hope.

We loved this book on a recent road trip. The prose was beautiful and the descriptions clear. Our book club had a lively discussion and are going to collect needed items for local homeless students. Can't wait to watch the movie.

A little repetitive at times, but I enjoyed this true story.

Really a great listen! I found the long descriptions of not finding his home town for many months a little boring, but over all really good!

This title is due for release on November 1, 2016
We'll send you an email as soon as it is available!