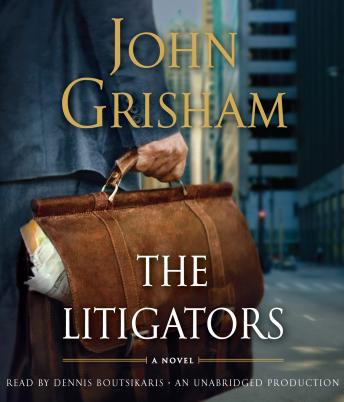 #1 NEW YORK TIMES BEST SELLER • After leaving a fast-track legal career and going on a serious bender, David Zinc is sober, unemployed, and desperate enough to take a job at Finley & Figg, a self-described “boutique law firm” that is anything but.

What they are is a two-bit operation always in search of their big break, ambulance chasers who’ve been in the trenches much too long making way too little. Their specialties, so to speak, are quickie divorces and DUIs, with the occasional jackpot of an actual car wreck thrown in. After twenty plus years together, Oscar Finley and Wally Figg bicker like an old married couple but somehow continue to scratch out a half-decent living from their seedy bungalow offices in southwest Chicago.

And then change comes their way. More accurately, it stumbles in. David Zinc, a young but already burned-out attorney, walks away from his fast-track career at a fancy downtown firm, goes on a serious bender, and finds himself literally at the doorstep of our boutique firm. Once David sobers up and comes to grips with the fact that he’s suddenly unemployed, any job—even one with Finley & Figg—looks okay to him.

With their new associate on board, F&F is ready to tackle a really big case, a case that could make the partners rich without requiring them to actually practice much law. An extremely popular drug, Krayoxx, the number one cholesterol reducer for the dangerously overweight, produced by Varrick Labs, a giant pharmaceutical company with annual sales of $25 billion, has recently come under fire after several patients taking it have suffered heart attacks. Wally smells money.

A little online research confirms Wally’s suspicions—a huge plaintiffs’ firm in Florida is putting together a class action suit against Varrick. All Finley & Figg has to do is find a handful of people who have had heart attacks while taking Krayoxx, convince them to become clients, join the class action, and ride along to fame and fortune. With any luck, they won’t even have to enter a courtroom!

It almost seems too good to be true.

The Litigators is a tremendously entertaining romp, filled with the kind of courtroom strategies, theatrics, and suspense that have made John Grisham America’s favorite storyteller.

I have listened to all of Grisham's books, legal and otherwise. This one is a great story, with plenty of humour and colourful characters. It lacks the gripping tension of Grisham's early novels, but more than makes up for it with a heart-warming story that reminds me a little of the Street Lawyer. Personally I would have had a lot more questions for the medical experts in the trial, but that's just me. I can heartily recommend this well-narrated book to Grisham fans.

What a great read! Funny! Charming! I couldn't wait for the next twist in the novel. On to the next one!

I dont understand the reviews. What exactly was great about this book. Honestly, the first half of the book kept me very entertained, obviously enough for me to get far enough in the book to realize it was going ABSOLUTELY nowhere. The character development was really good but the story, the actual litigation and storytelling surrounding that, was a predictable, anticlimactic, waste of time. I spent the last three hours of listening waiting for something of substance to happen only to get to the ending and listen to the last 45 minutes AGAIN because i thought for sure I had to miss some enthralling conclusion, character plot twist, or legal maneuver. There was none. I guess I'll stick to only purchasing grisham books that have had movies made- that must be a sign.

I really enjoyed it . Very entertaining

What a great read! Funny! Charming! I couldn't wait for the next twist in the novel. On to the next one!

This is the most boring Grisham book I've ever read. Exactly what you think happens happens

Another great Grisham story! Loved the narrator! Never disapointed with a Grisham book

Great read. Its continuity is outstanding and keeps you fully engaged.

I liked this book a lot. It had a few twists and turns that kept you guessing a bit. I am a John Grisham fan so I expected to like it anyway and I did. The narrator was very good too. It felt a little disjoined at times and some parts were kind of glossed over that could have been more detailed but overall it was very good.

I could not wait to listen, just like a book you can't put down. This is another excellent story by Grisham, absolutely riveting.

What fun! A good listen. Grisham writes interesting characters into his stories. A light read that is completely enjoyable.

a great read especially if you are in the medical profession