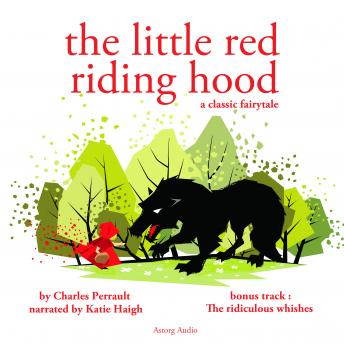 Little Red Riding Hood is a famous fairy tale about a young girl's encounter with a wolf. The story has been changed considerably in its history and subject to numerous modern adaptations and readings. The Little Red Riding Hood story is among the most popular fairy tales in the world. Once upon a time there was a little girl. Her grandmother gave her red riding hood and the girl loves it so much she have worn it all the time. So everybody started to call her Little Red Riding Hood. One day mother told the girl her grandmother fare ill. Because she lived alone deep in the wood, she would probably be happy to get some food. Than mother gave a basket with food and bottle of wine to the Little Red Riding Hood and told her: "Don't stray from the path!". The girl promised that but soon forgot about her promise. After a while she met a wolf in the wood...