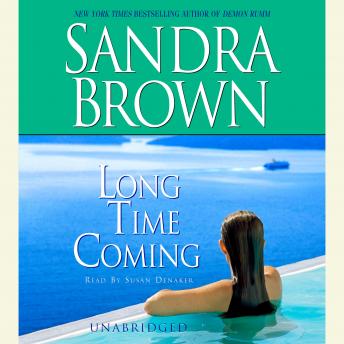 In more than fifty New York Times bestselling novels, Sandra Brown has captivated her millions of readers with stories of charismatic love and tantalizing twists of fate. In this classic tale, a woman is reunited with the man she has loved for years—and must reveal the secret that will jeopardize her chance for happiness at last.

He arrived out of the blue—a flesh-and-blood phantom from the past in a sports car as sleek and sexy as Law Kincaid himself. The world-famous astronaut was as devastatingly attractive as the first time Marnie Hibbs had laid eyes on him, seventeen years before. But she well knew the perils of falling for a ladies’ man like Law. And this time she had someone besides herself to protect. Law is determined to discover who is sending him anonymous letters claiming he’d fathered a son he knows nothing about. Showing up at the Hibbs’s return address from the letters seemed like a step in the right direction. Marnie swears she isn’t the guilty party, but when Law meets her son, it’s like a one-two punch to his solar plexus. The boy is nearly the spitting image of Law. Law can’t remember sleeping with Marnie—then again, he can’t remember much about his crazy past. But there’s more to it than that: Marnie claims the boy isn’t biologically hers.

As the tension between them becomes unbearable and the attraction undeniable, Marnie is forced to reveal a long-held secret...one that might cause her to lose both the boy she loves more than anyone—and the man she desires more than anything.

Not bad. A good love story - if you are 14 years old. I was hoping for something a little more adult. But it was an easy listen.

This was not a believable book. Marnie was too scary and appeared to have some deep seeded phychological problems. If I was Law, I would run hard and fast away from her. Besides all of the above, the book was too-dated and couldn't stand the test of time.

A great story! Some of SBs earlier straight romance books are so overly dramatic and drawn out, with way too much saccharine, but this one was darn near perfect. I prefer her later, more suspenseful novels, but of her early works this is one of my favorites thus far. Marnie is a strong character, not wishy washy and melodramatic. She stands her ground and Law has to put in work because she's not just going to fall into his arms...GOOD FOR HER! A great storyline as well. Keeps you interested. I highly recommend this one.