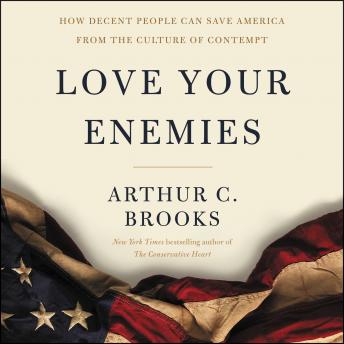 Love Your Enemies: How Decent People Can Save America from the Culture of Contempt

To get ahead today, you have to be a jerk, right?

Meanwhile, one in six Americans have stopped talking to close friends and family members over politics. Millions are organizing their social lives and curating their news and information to avoid hearing viewpoints differing from their own. Ideological polarization is at higher levels than at any time since the Civil War.

America has developed a “culture of contempt”—a habit of seeing people who disagree with us not as merely incorrect or misguided, but as worthless. Maybe you dislike it—more than nine out of ten Americans say they are tired of how divided we have become as a country. But hey, either you play along, or you’ll be left behind, right?

In Love Your Enemies, New York Times bestselling author and social scientist Arthur C. Brooks shows that treating others with contempt and out-outraging the other side is not a formula for lasting success. Blending cutting-edge behavioral research, ancient wisdom, and a decade of experience leading one of America’s top policy think tanks, Love Your Enemies offers a new way to lead based not on attacking others, but on bridging national divides and mending personal relationships.

Brooks’ prescriptions are unconventional. To bring America together, he argues, we shouldn’t try to agree more. There is no need for mushy moderation, because disagreement is the secret to excellence. Civility and tolerance shouldn’t be our goals, because they are hopelessly low standards. And our feelings toward our foes are irrelevant; what matters is how we choose to act.

Love Your Enemies is not just a guide to being a better person. It offers a clear strategy for victory for a new generation of leaders. It is a rallying cry for people hoping for a new era of American progress. And most of all, it is a roadmap to arrive at the happiness that comes when we choose to love one another, despite our differences.

Love Your Enemies: How Decent People Can Save America from the Culture of Contempt