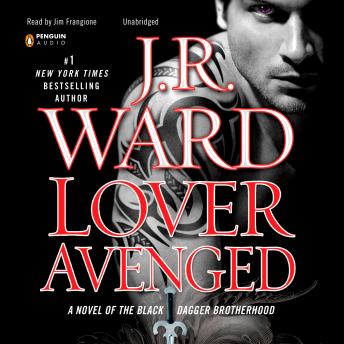 Lover Avenged: A Novel of the Black Dagger Brotherhood

As the vampire warriors defend their race against their slayers, one male’s loyalty to the Black Dagger Brotherhood will be tested in this breathtaking novel in J. R. Ward’s #1 New York Times bestselling paranormal romance series.

Caldwell, New York, has long been the battleground for the vampires and their enemies. It’s also where Rehvenge has staked out his turf as a drug lord and owner of a notorious nightclub that caters to the rich and heavily armed. His dangerous reputation is exactly why he’s approached to kill the leader of the Black Dagger Brotherhood—Wrath, the Blind King.

Rehvenge is used to living in the shadows and keeping his distance from the Brotherhood. As a symphath, his identity is a deadly secret—the revelation of which will result in his banishment. But as Rehvenge is pulled into plots both within and outside of the Brotherhood, he turns to the only source of light in his darkening world. Ehlena is a vampire untouched by the corruption that has its hold on him—and the only thing standing between Rehvenge and eternal destruction...

I have read these books before but the person reading the book is so good that does things that I missed in reading by myself. New dimensions of enjoyment. You must listen

My favorite book of the series.

Both my husband and I are addicted to these books!

Loved this book. It was very interesting ti listen to.

Loved this book I love them all equally. This narrator has really been my favorite from all the audio books I have read. This series is also my favorite I can't recommend this book enough.

I love this series. I accidentally stumbled upon it and can't stop going from one book to the next. I have thoroughly enjoyed the non stop twist and turns the series gives, along with hint of "50 shades of gray" it also gives off a bit. warning....if u start from book one...you won't be able to stop. my only regret is, I'm almost caught up. :(

This title is due for release on May 12, 2009
We'll send you an email as soon as it is available!