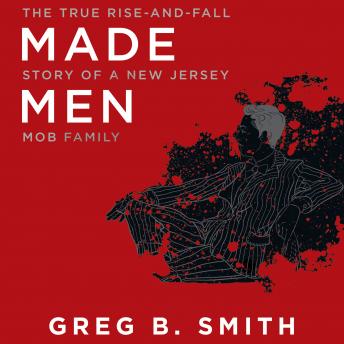 Made Men: The True Rise-and-Fall Story of a New Jersey Mob Family

Written By: Greg B. Smith

For years, the DeCavalcantes, the most powerful Mob family in Jersey, labored in the shadows of the more famous families in New York—the likes of the Gambinos and the Columbos. Dismissed by the big-city capos, the DeCavalcantes finally came into their own when they found their lives mirrored in the television hit, The Sopranos. Overnight it legitimized the made men of the Garden State. Now they were a familia to be reckoned with. Unfortunately with high profile came high risk. As member turned against member, as trusted friend turned terrified informant, the FBI put the brakes on the DeCavalcante’s explosive ride into infamy, hastening a fall from honor that would become as infamous as their notorious ascension into the annals of organized crime.Based on more than 1,000 hours of secretly recorded conversations, Made Men delivers, for the first time, the unprecedented and completely uncensored behind-the-scenes truth of a historically clandestine world—of violent life and sudden death inside and outside the mob, told by the very men who made it.

Made Men: The True Rise-and-Fall Story of a New Jersey Mob Family

by Greg B. Smith