Malcolm X: By Any Means Necessary 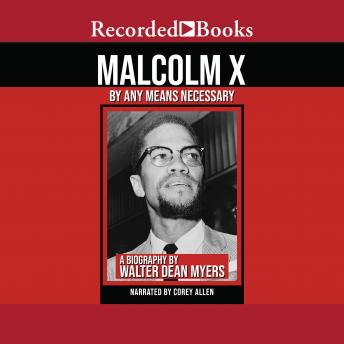 Martyr. Prophet. Hustler. Dealer. Troublemaker. Revolutionary. A BIOGRAPHY BY As a fourteen-year-old he was Malcolm Little, the president of his class and a top student. At sixteen he was hustling tips at a Boston nightclub. In Harlem he was known as Detroit Red, a slick street operator. At nineteen he was back in Boston, leading a gang of burglars. At twenty he was in prison. It was in prison that Malcolm Little started the journey that would lead him to adopt the name Malcolm X, and there he developed his beliefs about what being Black means in America. From streetwise teenager to the militant leader of hundreds of thousands in the Nation of Islam, Malcolm X was one of the most respected, and most feared, men in American history. Even today, years after his assassination, young people still listen to his speeches and read his autobiography. In this forthright and courageous account, Walter Dean Myers, two-time winner of the Newbery Honor and four-time winner of the Coretta Scott King Award, depicts a complex man whose life reflected the major issues of our times.

Malcolm X: By Any Means Necessary