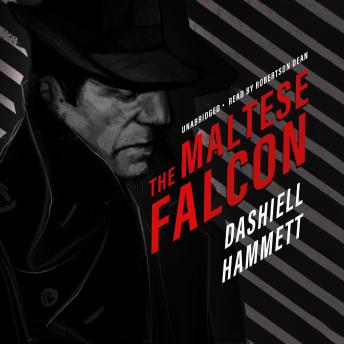 The definitive masterpiece of the hard-boiled detective genre, The Maltese Falcon first appeared in the pages of Black Mask magazine in 1929 and was almost immediately acknowledged as not only a great crime novel but an enduring masterpiece of American fiction.
Tough, cynical PI Sam Spade-a man who, as his creator explained, is "able to take care of himself in any situation, able to get the best of anybody he comes in contact with"-is hired by the story's irresistible femme fatale, Brigid O'Shaughnessy, to locate the client's sister by tailing her companion. Spade's partner, Miles Archer, takes on the assignment, and quickly both he and the man he was shadowing are murdered. As Spade pursues the mystery of his partner's death, he is drawn into a circle of colorful characters-all of them after a legendary statuette of a falcon fashioned long ago for King Charles V of Spain.
Made of gold and encrusted with jewels, the falcon is worth a fortune. Missing for centuries, it resurfaced in Paris in 1911, covered in black enamel to disguise its value, and then disappeared again until it was traced to Constantinople-and now, it would seem, to Spade's own backyard.