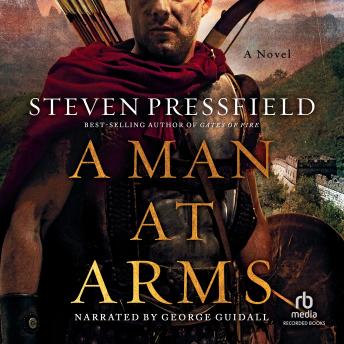 A Man at Arms

From the acclaimed master of historical fiction comes an epic about a reluctant hero, the Roman Empire, and the rise of a new faith.

Jerusalem and the Sinai desert, first century AD. In the turbulent aftermath of the crucifixion of Jesus, officers of the Roman Empire acquire intelligence of a pilgrim bearing an incendiary letter from a religious fanatic to insurrectionists in
Corinth. The contents of this letter could bring down the empire.

The Romans hire a former legionary, the solitary man-at-arms, Telamon of Arcadia, to intercept the letter and capture its courier. Telamon operates by a dark code all his own, with no room for noble causes or lofty beliefs. But once he
overtakes the courier, something happens that neither he nor the empire could have predicted.

In his first novel of the ancient world in thirteen years, the best-selling author of Gates of Fire and Tides of War returns with a gripping saga of conquest and rebellion, bloodshed and faith.

I first, in error, heard the narrator ( ) as a "voice of uncomfort". Knowing now that other narrators would be considered unwise to be associated to this WONDERFUL book. I see that secularists are convincing "narrators" to not be associated with "wise" literature. Changing the narrators reading to .9 instead of "natural" speed, made this enlightening and easier to understand. I will now be willing to listen to Steven Pressfields writings as they are truly wonderful!