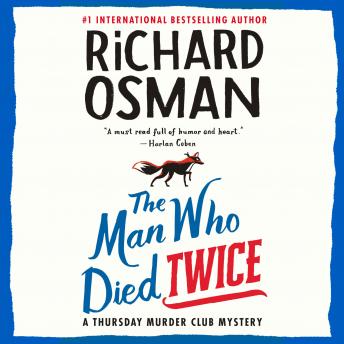 The Man Who Died Twice: A Thursday Murder Club Mystery

#2 of The Thursday Murder Club

Elizabeth, Joyce, Ron and Ibrahim—the Thursday Murder Club—are still riding high off their recent real-life murder case and are looking forward to a bit of peace and quiet at Cooper’s Chase, their posh retirement village.

But they are out of luck.

An unexpected visitor—an old pal of Elizabeth’s (or perhaps more than just a pal?)—arrives, desperate for her help. He has been accused of stealing diamonds worth millions from the wrong men and he’s seriously on the lam.

Then, as night follows day, the first body is found. But not the last. Elizabeth, Joyce, Ron and Ibrahim are up against a ruthless murderer who wouldn’t bat an eyelid at knocking off four septuagenarians. Can our four friends catch the killer before the killer catches them?  And if they find the diamonds, too? Well, wouldn’t that be a bonus?  You should never put anything beyond the Thursday Murder Club.

Richard Osman is back with everyone’s favorite mystery-solving quartet, and the second installment of the Thursday Murder Club series is just as clever and warm as the first—an unputdownable, laugh-out-loud pleasure of a read.

Love it, love it, love it…. What fun! It had me laughing all the way through the book. I can’t wait for the next book in the series. The narrator is so wonderful…. She really hits it perfectly to pull you in and make you fall in love with these fun and amazing characters. I want to join the Thursday Murder club! “MORE PLEASE IS RIGHT ON”

The 2nd book in the series and it’s just as good as the first!!! I want more please!!!

Fun book, some times a bit too chatty (Joice of course) but altogether a delight

Fun and intriguing ! Still have questions concerning one additional character ??

I have enjoyed listening to this series. A fun twist to murder mystery with suspense and comedy mixed together. I'm eager to see when the third book is released

Not my cup of tea.

I enjoyed this book. The cast of characters is charming.

Even better than the first book!!!! I loved getting to know our Thursday Club elderly, adventurous and wily sleuths in the author’s first book but I’d found the murder mystery itself a bit vague and convoluted; the charm of the story had been in the characters and locale. For Richard Osman’s first sequel, all the stops were pulled out. The characters I loved are even more lovable and this time the criminals are delicious as well. The mystery is tightly woven, makes so much sense and is such a delight to follow in its twists and turns. A diamond caper with spies! A winning combination. I found that waiting for a year for the sequel to arrive had been a pleasant wait…. but this time, I am so anxious to head back again to hang with the wonderful cast of warm, kooky and brilliant characters Mr. Osman has created. I didn’t want this book to end. I don’t know how I can wait!! Perfect from start to finish. Not only is the story brilliant, but the narrator - who was so charming in her reading of the first novel - is even better than before as well. Everyone springs to magical life, distinct from one another. Lesley Manville is such a treat to listen to. I had so many laugh out loud moments, as well as feeling the affection the characters have for one another. Author and narrator well matched. A must read - and must-hear - for anyone who is a fan of colorful and quirky British murder mystery series. More, please!