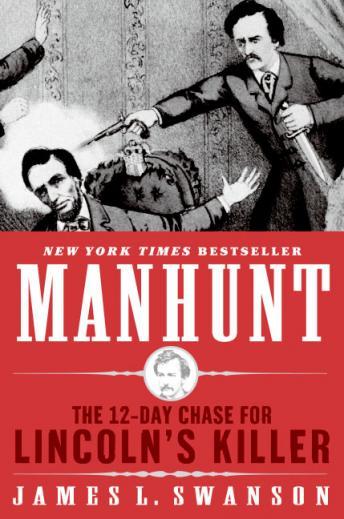 The murder of Abraham Lincoln set off the greatest manhunt in American history -- the pursuit and capture of John Wilkes Booth. From April 14 to April 26, 1865, the assassin led Union cavalry troops on a wild, twelve-day chase from the streets of Washington, D.C., across the swamps of Maryland, and into the forests of Virginia.

At the very center of this story is John Wilkes Booth, Americas notorious villain. A confederate sympathizer and member of a celebrated acting family, Booth threw away his fame, wealth, and promise for a chance to avenge the Souths defeat. For almost two weeks, he confounded the manhunters, slipping away from their every move and denying the justice they sought.

Manhunt is a fully documented work, but it is also a fascinating tale of murder, intrigue, and betrayal. A gripping hour-by-hour account told through the eyes of the hunted and the hunters, this is history as youve never read it before.

Great book and great narration! Had no idea how much more there was to the story of Abaham Lincoln and John Wilkes Boothe. Highest recommendation!

My 85 year old father loved this book. He found it very entertaining and enlightening. He learned some things he didn't know and could hardly stop the book once he got started.

This book was great - Gave very many facts - at least they seemed liked facts. Seems the author did his research. Was very interesting and kept me wanted more.

At first, I was going to give this book 4 stars, just because the story at times you want to yell at the characters and inform them of their horrible navigation. Then I thought, that knowledge is what upsets me, and that being said, it's well written, so I changed this thing to a five star book. This is not only a great account of history, but all what it was like in that time. How Pictures of John Wilkes Booth were outlawed etc.I recommend going through this one

Who knew that the short time between Lincoln's assassination and Booth's end could be so thrilling and interesting. While the narration is a bit over-dramatic at times, it is done very well and adds to the story. It is amazing to learn about the plans and coincidences that played out the way they did. An excellent book.

This is a great story! Inclusion of the many "minor" characters, like Thomas Jones, Samuel Mudd, the Garretts, etc., makes the story very rich. The interview with the author at the end was nice, too. My only (slight) criticism is that I thought the author's language was a bit melodramatic at a few points. I highly recommend.

Living in the DC area, I find myself wanting to visit the historic sites the author talks about, which are still around. Having been to Ford's Theatre years ago, I would like to go back & view it thru different eyes, Knowing what I know after listening to this CD, I believe it will have a lot more meaning for me now. I found myself almost liking Booth, as well. But, then there was the brutalness of what he did and why. If he had not assassinated Lincoln, maybe our history would have been a lot different. Maybe other assassins would not have been so quick to act. We don't know. I like history okay, but I am no history buff. However, I found myself very engaged in this thrilling account of the manhunt. I would look forward to being back in my car listening to the rest of the story. I plan to listen a second time.

This book is wonderful. After listening to it, I spent quite a bit of time searching for even more detail on the topic and characters on the internet. I hope this author will write more books!

Richard Thomas is one of the best narrators of audio books out there. This is no exception the performance is engaging and historically accurate the cd keeps a good pace and is a true pleasure to listen to kudos to all involved in a great piece of work.

Well written, researched and well woven together. Nice blend of the story with added touches that made it a delightful read.

Stunning page turner! Truly a gripping tale. Funny though, I found myself almost liking John Wilkes Booth. I would, of course, wish that President Lincoln had not been assassinated, however.

Very interesting read. There is a lot of detail and interesting observation about the assassination of Lincoln and the manhunt for John Wilkes Booth. At times, there are wonderful observations about the absurdity of a conversation or event, in light of the surrounding context....very informative and interesting, and as the author said, the truth is stranger than fiction here....I highly recommend this book.

Very good. It has the details appreciated by any history buff but they are in no way mundane. It is a great read and as the author says in the beginning, there is no need to embelish the story - in this case truth is stranger than fiction.

This book is wonderful. Very well researched and written. Even if you're not a history or Lincoln buff, the way it is written captures your attention and holds it until the end. If you think you know the story about John Wilkes Booth and the assassination of Lincoln, this book serves to expand your knowledge and understanding twofold.

This series is so interesting, sometimes I listen twice. If you have any interest at all in the murder of Lincoln, you will totally be captivated by the details of his escape.

This book traces Booth's plot to assasinate Lincoln. It is a very detailed account which occasionally drifts toward the melodramatic. The vivid description of Booth and his compatriots and their attempt to bring down the republic by killing Lincoln, Stanton and Seward is a worthwhile listening experience. The shooting at Ford Theater is particularly well-written and adds unique details to this historic event.

Very interesting and informative book. Keeps your attention and provides lively dialogue. The only weakness is the final part, which in my opinion gets a bit melodramatic. Worth checking out, particularly if history is of interest.

I have enjoyed this book a lot. It is a well written book. The reader does a very good job. It has given me insights which I did not get while studying history. I am looking forward to the second set of discs.

Wonderful historical work as well as an entertaining thriller! Thoroughly enjoyed listening to it!

This title is due for release on February 7, 2006
We'll send you an email as soon as it is available!