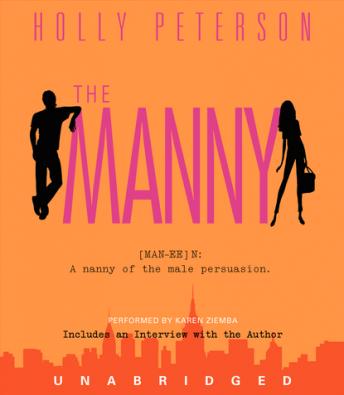 What's a Park Avenue working mom to do when her troubled son desperately needs a male role model? If she's like the gutsy heroine of Holly Peterson's astute new comedy of manners, she does what every other woman on the block does. She hires a manny.

A middle-class girl from Middle America, Jamie Whitfield isn't 'one of them' but she lives in 'the Grid,' the wealthiest acre of real estate in Manhattan. And she has most everything they have—a sprawling, new apartment, full-time help, as well as her very own detached attorney husband. What she doesn't have, is a full-time father figure for their struggling nine-year-old son, Dylan. Enter The Manny. At first the idea of paying a man to provide a role model for Dylan sounds crazy. But Peter Bailey is calm, cool, competent and so charmingly down-to-earth, he's irresistible. And with her career as a news producer in overdrive, and her husband locked in his study, Jamie is in serious need of some grounding. But will the new manny in her life put the ground back beneath her feet, or sweep her off them?

This title is due for release on June 19, 2007
We'll send you an email as soon as it is available!