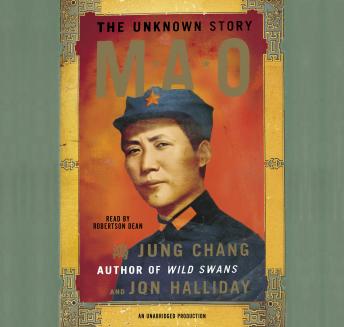 “Ever since the spectacular success of Chang’s Wild Swans we have waited impatiently for her to complete with her husband this monumental study of China’s most notorious modern leader. The expectation has been that she would rewrite modern Chinese history. The wait has been worthwhile and the expectation justified. This is a bombshell of a book.”
–Chris Patten, the last governor of Hong Kong, in The Times (London)

Based on a decade of research and on interviews with many of Mao’s close circle in China who have never talked before–and with virtually everyone outside China who had significant dealings with him–this is the most authoritative life of Mao ever written. It is full of startling revelations, exploding the myth of the Long March, and showing a completely unknown Mao: he was not driven by idealism or ideology; his intimate and intricate relationship with Stalin went back to the 1920s, ultimately bringing him to power; he welcomed Japanese occupation of much of China; and he schemed, poisoned and blackmailed to get his way. After Mao conquered China in 1949, his secret goal was to dominate the world. In chasing this dream he caused the deaths of 38 million people in the greatest famine in history. In all, well over 70 million Chinese perished under Mao’s rule–in peacetime.

Combining meticulous research with the story-telling style of Wild Swans, this biography offers a harrowing portrait of Mao’s ruthless accumulation of power through the exercise of terror: his first victims were the peasants, then the intellectuals and, finally, the inner circle of his own advisors. The reader enters the shadowy chambers of Mao’s court and eavesdrops on the drama in its hidden recesses. Mao’s character and the enormity of his behavior toward his wives, mistresses and children are unveiled for the first time.

This is an entirely fresh look at Mao in both content and approach. It will astonish historians and the general reader alike.

Incredible book, heavy going but would recommend it to anyone with any interest in Mao and that time period of China.

A must read for anyone underage 45!!

This title is due for release on March 7, 2006
We'll send you an email as soon as it is available!