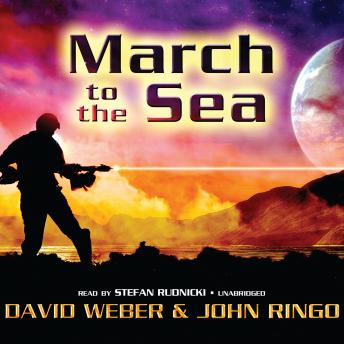 March to the Sea

#2 of The Prince Roger Series

Prince Roger MacClintock, Tertiary Heir to the Throne of Man, was a spoiled rotten, arrogant, whiny, thoroughly useless young pain in the butt. But that was before an assassination attempt marooned the Royal Brat and his bodyguards on the planet Marduk, and before they had to march half way around the planet, through 120-degree heat and five-hour rainstorms in jungles full of damnbeasts, capetoads, killerpillars, and atul-grak, not to mention hostile peoples, to make their way back to port.

Under the right circumstances, even the most spoiled brat can grow up fast, and it turns out that, under his petulant exterior, Prince Roger is a true MacClintock, a scion of the warrior dynasty that created the Empire of Man. Now both Prince and bodyguards are determined to get each other off the planet alive. Of course, the planet has other ideas.