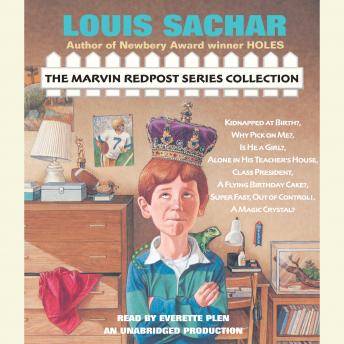 Kidnapped at Birth?: Marvin Redpost has finally figured out why he doesn't look like anyone in his family. He's not really Marvin Redpost—he's Robert, the lost prince of Shampoon!

Why Pick on Me?: Marvin is shunned by his classmates and teacher after he is unfairly fingered as a nose-picker by the class bully.

Is He a Girl?: Will kissing his elbow really turn Marvin into a girl? Casey Happleton claims it's so.

Alone in His Teacher’s House: Marvin's friends think he's the luckiest boy in the world when his teacher asks him to dog-sit for a week. But pretty soon it starts to look as if Marvin is not so lucky after all....

Class President: It's 'hole day,' and even Mrs. North and Principal McCabe are wearing their very worst clothes. It seemed like a fun idea that morning, but now the president of the United States is on his way! And there's no time to change!

A Flying Birthday Cake: Marvin and Stuart get to sleep over in Nick Tuffle’s backyard for Nick’s birthday. Marvin he hears a noise in the night, and something glowing zooms over his head. The next day, a very strange new kid shows up at school….

Super Fast, Out of Control!: The word at school is that Marvin will be taking on Suicide Hill with his new mountain bike. But the truth is, he can barely climb on the seat!

A Magic Crystal?: Casey Happleton shows Marvin the magic crystal she has just found and offers to give Marvin a few wishes. Is the crystal really magic? Or is it too good to be true?

This title is due for release on March 12, 2013
We'll send you an email as soon as it is available!