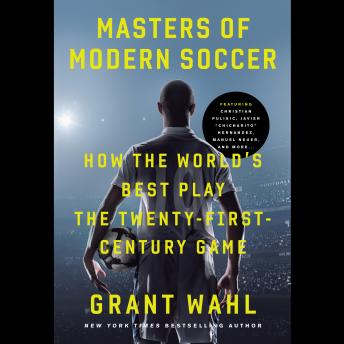 Masters of Modern Soccer: How the World's Best Play the Twenty-First-Century Game

Masters of Modern Soccer is the definitive thinking fan's guide to modern soccer. For a supporter of any team, from the U.S. national teams to Manchester United, or any competition, from Mexico's Liga MX to the World Cup, this book reveals what players and managers are thinking before, during, and after games and delivers a true behind-the-scenes perspective on the inner workings of the sport's brightest minds.

America's premier soccer journalist, Grant Wahl, follows world-class players from across the globe examining how they do their jobs. This access imbues Masters of Modern Soccer with deep insight from the players on how goalkeepers, defenders, midfielders, and forwards function individually and as a unit to excel and win. Wahl also shadows a manager and director of soccer as they juggle the challenges of coaching, preparation, and the short- and long-term strategies of how to identify and acquire talent and deploy it on the field.

A book that will stand the test of time, Masters of Modern Soccer is the most in-depth analysis of the craft of soccer ever written for the American fan. For any fan, player, coach, or sideline enthusiast, this book will change the way they watch the game.

Masters of Modern Soccer: How the World's Best Play the Twenty-First-Century Game

This title is due for release on May 1, 2018
We'll send you an email as soon as it is available!