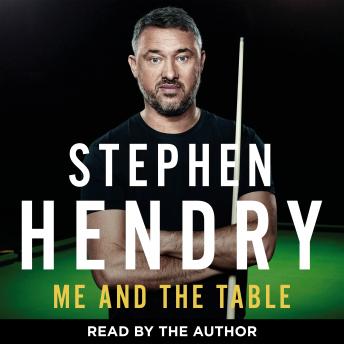 Me and the Table - My Autobiography

The story of history's most successful snooker player began in 1981, when Stephen Hendry's parents gave their twelve-year-old son a junior-sized table as a Christmas present. From the moment he picked up the cue, he was focused on becoming the best player the world had ever seen. During a time regarded as the golden age of the sport, he took on and won against giants of the game, such as Steve Davis, 'Hurricane' Higgins and Jimmy White. Over a 27-year career, he won the World Championship seven times, the Masters six times and the UK Championship five times.

In Me and the Table, Hendry tells his extraordinary life story for the first time. He speaks candidly about the world of snooker in the 1980s and '90s, and also reflects on the difficult years of his career during the 2000s, when he had to delve deeper than ever before to bring about changes in both his game and his life. Hendry retired in 2012 and has forged a new career as a sports pundit and commentator, playing in exhibition matches and spending time in China, playing Chinese eight-ball. To this day, no one has beaten his seven World Champion titles. At last, the legend tells his story.

'Snooker, for all its ups and downs, is my sanctuary and always has been. Whenever I've felt disappointed, depressed, or caught up in a crisis, the table has always been there for me, comforting and unchanging.'

Me and the Table - My Autobiography

This title is due for release on September 6, 2018
We'll send you an email as soon as it is available!