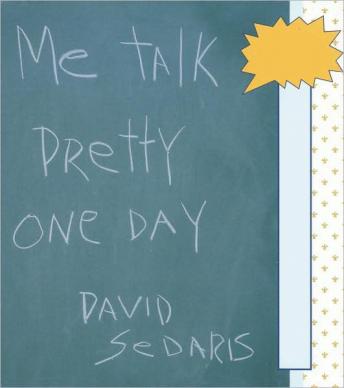 Me Talk Pretty One Day

A new collection from David Sedaris is cause for jubilation. His recent move to Paris has inspired hilarious pieces, including Me Talk Pretty One Day, about his attempts to learn French. His family is another inspiration. You Cant Kill the Rooster is a portrait of his brother who talks incessant hip-hop slang to his bewildered father. And no one hones a finer fury in response to such modern annoyances as restaurant meals presented in ludicrous towers and cashiers with 6-inch fingernails. Compared by The New Yorker to Twain and Hawthorne, Sedaris has become one of our best-loved authors. Sedaris is an amazing reader whose appearances draw hundreds, and his performancesincluding a jaw-dropping impression of Billie Holiday singing I wish I were an Oscar Meyer weinerare unforgettable. Sedariss essays on living in Paris are some of the funniest hes ever written. At last, someone even meaner than the French! The sort of blithely sophisticated, loopy humour that might have resulted if Dorothy Parker and James Thurber had had a love child. Entertainment Weekly on Barrel Fever Sidesplitting Not one of the essays in this new collection failed to crack me up; frequently I was helpless. The New York Times Book Review on Naked

This is my absolute favorite! I love hearing him narrate it even more. So grateful for David Sedaris.

Mr. Sedaris has an amazing easy satirical style which is a joy to read or listen to . . .

Sedaris is great. Helped our road trip greatly. Loved it like I love all his stuff.

Filled me with giggles! Light & deep at the same time.

He's very entertaining and his stories (real or embellished) are always unique. His telling of tales, in his voice, is also unique. Especially love the stories of his family. What a group.

Sedaris is enjoyable, easy to listen to, and great storyteller. His essays are quick, funny, and worth your time.

This title is due for release on April 1, 2006
We'll send you an email as soon as it is available!