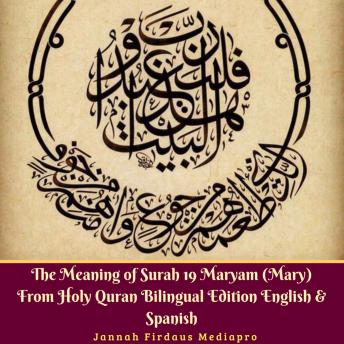 The name of this chapter is taken from the story of Mary, mother of Jesus (verses 16–35). It begins with an account of the birth of John and of Jesus, the last representatives of prophecy in the house of Israel. The claim that Jesus is the son of God is firmly denied, as is the assertion of the pagans of Mecca that the angels are God’s daughters. It then mentions the missions of some earlier prophets, showing that only human beings are raised to reform the world.

Consisting of 93 verses, this is one of the early Meccan chapters, and was recited to Negus (Christian king of Abyssinia) in the presence of hostile ambassadors of Quraish, in the fifth year of Prophet Muhammad’s advent, nine years before Hijrah, by Ja’far, the head of the Muslim refugees, whereupon, according to the earliest Muslims chroniclers, the king and the bishop wept saying, ‘Indeed, this revelation and that of Moses proceed from one and the same source.’

The Quran makes us believe in the power of God in such a way that it enables us to see beyond the predictability of cause and effect. Although God has made this universe in such a way that for everything there is physical reasoning but at the same time God has also made miracles happen which make us realize that God is not dependent on these laws. We find in the Quran such examples which make us "see" this power, so that the closer we come towards Him with love and submission, the more belief we have in our hopes and dreams turning into reality.

This title is due for release on October 3, 2018
We'll send you an email as soon as it is available!