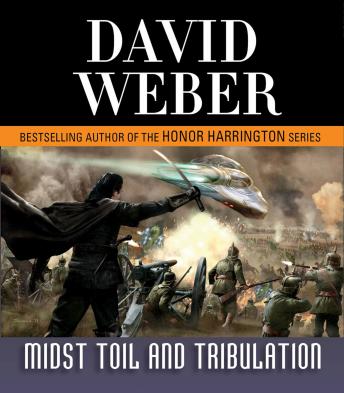 Midst Toil and Tribulation: A Novel in the Safehold Series (#6)

Once the Church of God Awaiting dominated all the kingdoms of Safehold. Then, after centuries of stasis, the island kingdom of Charis began to defy the edicts of Mother Church--egged on, some say, by the mysterious warrior-monk Merlin Athrawes, who enjoys the Charisian royal family's absolute trust.

What vanishingly few people know is that Merlin is the cybernetic avatar of a young woman a thousand years dead, felled in the war in which aliens destroyed Earth...and that since awakening, his task has been to restart the history of the long-hidden human race.

Now, reeling from the wars and intrigues that have cascaded from Charis's declaration of independence, the Republic of Siddermark slides into chaos. The Church has engineered a rebellion, and Siddermark's all-important harvest is at risk. King Cayleb and Queen Sharleyan struggle to stabilize their ally, which will mean sending troops--but, even more importantly, preventing famine. For mass starvation in Safehold's breadbasket is a threat even more ominous than civil war...

Narrator does a great job of changing accents for different characters, however he has completely changed the pronunciation of several key characters and locations, which is a little jarring to hear after five previous books