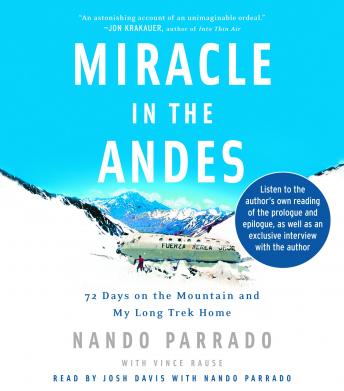 Miracle in the Andes: 72 Days on the Mountain and My Long Trek Home

NEW YORK TIMES BESTSELLER • A harrowing, moving memoir of the 1972 plane crash that left its survivors stranded on a glacier in the Andes—and one man’s quest to lead them all home

“In straightforward, staggeringly honest prose, Nando Parrado tells us what it took—and what it actually felt like—to survive high in the Andes for seventy-two days after having been given up for dead.”—Jon Krakauer, author of Into the Wild

“In the first hours there was nothing, no fear or sadness, just a black and perfect silence.”

Nando Parrado was unconscious for three days before he woke to discover that the plane carrying his rugby team to Chile had crashed deep in the Andes, killing many of his teammates, his mother, and his sister. Stranded with the few remaining survivors on a lifeless glacier and thinking constantly of his father’s grief, Parrado resolved that he could not simply wait to die. So Parrado, an ordinary young man with no particular disposition for leadership or heroism, led an expedition up the treacherous slopes of a snowcapped mountain and across forty-five miles of frozen wilderness in an attempt to save his friends’ lives as well as his own.

Decades after the disaster, Parrado tells his story with remarkable candor and depth of feeling. Miracle in the Andes, a first-person account of the crash and its aftermath, is more than a riveting tale of true-life adventure; it is a revealing look at life at the edge of death and a meditation on the limitless redemptive power of love.

This title is due for release on May 9, 2006
We'll send you an email as soon as it is available!