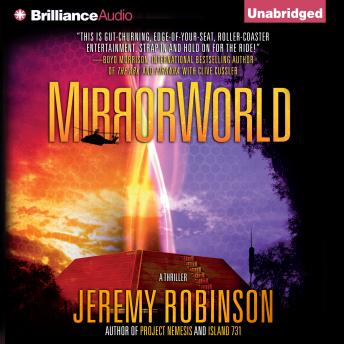 CRAZY has no memory and feels no fear, speaking and acting without concern for consequences. Dangerous and unpredictable, he's locked away in SafeHaven, a psychiatric hospital, where he spends the long days watching Wheel of Fortune and wondering what the outside world smells like. When a mysterious visitor arrives and offers him a way out-stabbing himself with a knife-he doesn't hesitate to accept.

Freed from the hospital, Crazy finds a fear-fueled world on the brink of nuclear annihilation. He's relocated to Neuro Inc., a secretive corporation with shady government ties, where the doctors are interested in his fearless nature. After he discovers evidence of human experimentation, a desperate bid to escape the facility concludes with a cornered Crazy making himself indispensable by injecting a syringe-the contents of which are a mystery to him, but precious to Neuro-into his leg.

The experimental drug opens his senses to dimensions of reality beyond human experience, where fear is a weapon and the shadows hide the source of mankind's nightmares: strange and horrible creatures known as the Dread. Struggling to understand his new ability to move between worlds and the monsters only he can fight, Crazy allies himself with the company he fled and begins peeling back the layers of his past, his memories revealing the brewing war between worlds, how he can stop it-and what he did to start it.

With MirrorWorld, Jeremy Robinson, whose trademarked pacing and inventive plots have been highly praised by bestselling authors like Jonathan Maberry, Scott Sigler, and James Rollins, treats listeners to a wildly imaginative, frenetically paced thriller exploring the origins of fear.

Some people can see another world. A shadow world. This is what happens when 2 different societies find out about each other