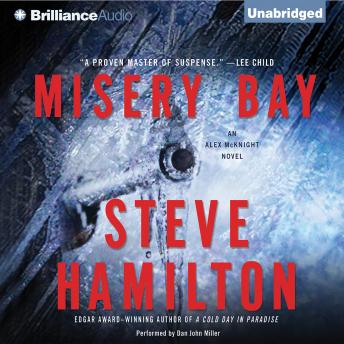 On a frozen January night, a young man loops one end of a long rope over the branch of a tree. The other end he ties around his neck. A snowmobiler will find him thirty-six hours later, his lifeless eyes staring out at the endless cold water of Lake Superior. It happens in a lonely corner of the Upper Peninsula, in a place they call Misery Bay.

Alex McKnight does not know this young man, and he won’t even hear about the suicide until another cold night, two months later and 250 miles away, when the door to the Glasgow Inn opens and the last person Alex would ever expect to see comes walking in to ask for his help.

What seems like a simple quest to find a few answers will turn into a nightmare of sudden violence and bloody revenge and a race against time to catch a ruthless killer. McKnight knows all about evil, of course, having faced down a madman who killed his partner and left a bullet next to his heart. Mobsters, drug dealers, hit men - he’s seen them all, and they’ve taken away almost everything he’s ever loved. But none of them could have prepared him for the darkness he’s about to face.

This title is due for release on June 7, 2011
We'll send you an email as soon as it is available!