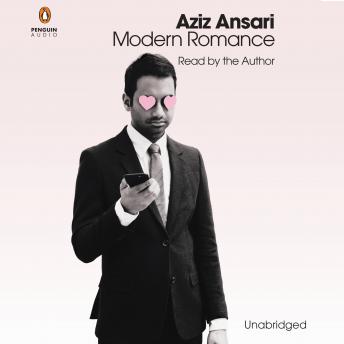 A hilarious, thoughtful, and in-depth exploration of the pleasures and perils of modern romance from Aziz Ansari, the star of Master of None and one of this generation’s sharpest comedic voices

At some point, every one of us embarks on a journey to find love. We meet people, date, get into and out of relationships, all with the hope of finding someone with whom we share a deep connection. This seems standard now, but it’s wildly different from what people did even just decades ago. Single people today have more romantic options than at any point in human history. With technology, our abilities to connect with and sort through these options are staggering. So why are so many people frustrated?

Some of our problems are unique to our time. “Why did this guy just text me an emoji of a pizza?” “Should I go out with this girl even though she listed Combos as one of her favorite snack foods? Combos?!” “My girlfriend just got a message from some dude named Nathan. Who’s Nathan? Did he just send her a photo of his penis? Should I check just to be sure?”

But the transformation of our romantic lives can’t be explained by technology alone. In a short period of time, the whole culture of finding love has changed dramatically. A few decades ago, people would find a decent person who lived in their neighborhood. Their families would meet and, after deciding neither party seemed like a murderer, they would get married and soon have a kid, all by the time they were twenty-four. Today, people marry later than ever and spend years of their lives on a quest to find the perfect person, a soul mate.

For years, Aziz Ansari has been aiming his comic insight at modern romance, but for Modern Romance, the book, he decided he needed to take things to another level. He teamed up with NYU sociologist Eric Klinenberg and designed a massive research project, including hundreds of interviews and focus groups conducted everywhere from Tokyo to Buenos Aires to Wichita. They analyzed behavioral data and surveys and created their own online research forum on Reddit, which drew thousands of messages. They enlisted the world’s leading social scientists, including Andrew Cherlin, Eli Finkel, Helen Fisher, Sheena Iyengar, Barry Schwartz, Sherry Turkle, and Robb Willer. The result is unlike any social science or humor book we’ve seen before.

In Modern Romance, Ansari combines his irreverent humor with cutting-edge social science to give us an unforgettable tour of our new romantic world.

Awesome book! Was very cool to hear Aziz read the book! He is not only hilarious but very insightful! Great book! Recommend read!

I honestly don’t know how I got through the whole thing. Three stars because clearly he did his reasearch and tried to present statistics in a humorous way. The problem for me is that it is just depressing.

Great book. I enjoyed his voice and comedy within his narration. Gave it four stars: although it was informative about today’s world of dating... I didn’t really gain anything from it. Matter of fact, if it was someone else narrating I would have gave it a lower rating.

I love Aziz Ansari's stand-up comedy and sarcastic humor, so I was excited the book was narrated by him, and I was not disappointed! The side commentary during his narration specifically for audio listeners was enjoyable, so I'm glad I got the audio version. His narration alone had me sold. However, if you aren't a fan of his stand-up, you will probably will not find this audio book as enjoyable. The book is also really informative, so I found it to be a great read for Millennials in its own right! Aziz Ansari did a lot of research for the book (arguably a chapter or two too much, but that's okay), including cross-culturally. I enjoyed seriously learning about modern dating alongside the laughs I was hoping for.

Aziz Ansari never disappoints! I read this book while in a relationship and kept thinking to myself, "I'm so glad I'm not single!" Now that I'm single, I'm thinking "oh I hope Aziz's book wasn't right!" Well, I'm finding that it is.

Great narration by Aziz and some interesting new info on the subject.

Easy to follow, nothing new in terms of content and the narator is searing a bit too much :) Funny outlook on what it means to be single in the digital age with endless choices and no privacy. Must read for Millennials!

Great points on technology and being that I'm 27 my generation is losing sight of what a real relationship is. However some cheesy jokes and rambling made me lose focus at some points. Overall I enjoyed it and think Aziz is hilarious!

Loved it. A great balance between humor and information.

I switched to listen something else between this book. It's not funny as others said. Well, It just was not for me.

Aziz was amazing as narrator. I got the audio book because I like his stand up and didn't realize how in depth his research was going to be. I kept listening because of Aziz and his off the cuff remarks just for us audio listeners in the areas that were a little slow.

i never expected this book to be so insightful and funny at the same time. Aziz narration was incredibly funny and refreshing.

Even as a Norwegian girl at 32, this book's content feels scarily accurate to my love life...! I spread out laughs and giggles while walking in the streets with Aziz in my earphones. Enjoyable and comforting are key words for this tead/listen. Go for it.

I enjoyed the book but at the same time it wasn't that book I couldn't stop listening to. It took me a week! i finally has enough from it staring at me and i think it was because it was a topic that is interesting but exhausting at the same time. Awesome narrating though.

Great reading from start to finish. Aziz does a great job researching the modern world of love and how technology has changed our ways of finding it. Funny, informative and overall keeps you interested.

Playful, engaging and informative, with cheeky humor, a really easy to listen to narration voice, and lots of fun, surprising data to back up a multitude of subjects within the "Modern Romance" umbrella. The book lost some steam for me about 2/3 through for a small blip, becoming very data heavy as it jumped to modem love concepts across a variety of countries, but it was still immensely entertaining and an enjoyable listen.

Must read and humorous summary of dating in the modern era

For the most part, Aziz is just going over obvious stuff here. The chapter he did on Japan was the only thing I found particularly interesting or informative. He does a great job narrating though, and there are some cheeky comments he adds just for the audio book :)

The only reason I liked this book was because I loved listening to Aziz. He's hilarious and I just love his little side comments about everything. If I had just read the book and not listened to it, then I probably would have not finished it. Most of the stuff he talks about is pretty obvious. It's just discussing the differences in romance in different eras as well as different countries. It was interesting but this isn't something that I would be dying the listen to or read again. Although, I did recommend this to my cousin because he has a man crush on Aziz.... So if you like him then listen to it!

I enjoyed this audio book. I found it insightful and applicable for both men and women. The dimension of the book is aided by the authors use of storytelling through diverse generations and cultures. The narrative is very funny and true to my personal experiences as well. This book is a useful guid to understanding the positive effect of personal development in ones 20s. The cultural experiences aid in the perspective of extreme binaries and impact. Japan vs. Argentina. GI generation vs. Generation Y. This is a useful tool in drawing insight and contextual example on the perspective of romance ????

Fun to listen to! Interesting book that validates a lot of dating experiences my friends and I have had

Loved it. As an academic, it was great to see a comedian pairing up with some of the leading experts in the field to bring their research into such an approachable medium. Aziz is funny, and if you are familiar with his work will find a few jokes you have heard before, but it is mostly new stuff. It isn't a pure comedy book, it is insightful and witty. If you are looking for stand-up in book form look somewhere else. Narration was amazing. I loved the little "asides" one gets in an audio book that one doesn't get in the printed form. This is especially true of comedy writers. However, I would suggest that Aziz look into what Tina Fey did with her audio book, in that she had a PDF appendix to refer to when discussing images that you can use for the graphs you reference in your text. Other than that--fantastic.

great, insightful look into relationships in the new age

This (audio) book is quite a departure from the norm I'm typically interested in. I initially saw Aziz present this book on the Daily Show with Jon Stewart. If you're on the fence about this book, I suggest you watch the interview. The book is not fluff, it's a great cross section into what dating in 2015 is...or what relationship are in 2015. It was refreshing to hear what modern romance was several decades ago, a few years ago, versus what it is now. Investigative focus groups into USA, Japan, Argentina, and France were informative and allowed him to triangulate his message into a way that allows you to find yourself and tendencies on one or more different planes. Whether dating, committed, or curious....it's a damn fine listen, and one of the few I finish. Kudos Aziz!

This title is due for release on June 16, 2015
We'll send you an email as soon as it is available!