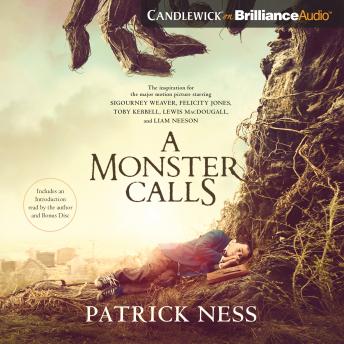 A Monster Calls: Inspired by an Idea from Siobhan Dowd

NOW A #1 NEW YORK TIMES BESTSELLER! An unflinching, darkly funny, and deeply moving story of a boy, his seriously ill mother, and an unexpected monstrous visitor.

At seven minutes past midnight, thirteen-year-old Conor wakes to find a monster outside his bedroom window. But it isn’t the monster Conor’s been expecting-- he’s been expecting the one from his nightmare, the nightmare he’s had nearly every night since his mother started her treatments. The monster in his backyard is different. It’s ancient. And wild. And it wants something from Conor. Something terrible and dangerous. It wants the truth. From the final idea of award-winning author Siobhan Dowd-- whose premature death from cancer prevented her from writing it herself-- Patrick Ness has spun a haunting and darkly funny novel of mischief, loss, and monsters both real and imagined.

“Compelling...powerful and impressive.” —Philip Pullman, author of the award-winning His Dark Materials trilogy

“Exceptional...this is storytelling as it should be—harrowing, lyrical, and transcendent.” —Meg Rosoff, author of the Printz Award–winning novel How I Live Now

“Brilliant and elegant, with all the thrills and ambition you would expect from the author of the Chaos Walking trilogy.” —Frank Cottrell Boyce, award-winning author of Millions and Cosmic

“Haunting, lyrical, powerful, and true. Patrick Ness has crafted a masterful story about grief and loss, love and hope that lingers in the heart like a ghost.” —Libba Bray, author of the Printz Award-winning novel Going Bovine

Very touching and sweet story!! Looking forward to the movie and Liam Neeson as the voice of the Monster...