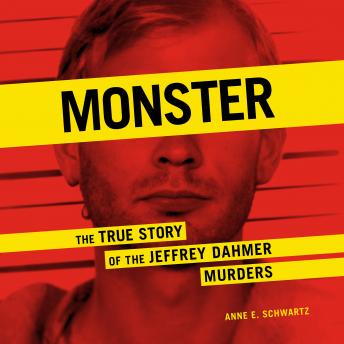 Monster: The True Story of the Jeffrey Dahmer Murders

One night in July 1991, two policemen saw a man running handcuffed from the apartment of Jeffrey Dahmer. Investigating, they

made a gruesome discovery: three human skulls in Dahmer’s refrigerator and the body parts of at least 11 more people scattered

throughout the apartment. Shortly after, Milwaukee Journal reporter Anne E. Schwartz received a tip that would change her life.

This book spans the entire Dahmer case; Schwartz, who broke the story, details it all: the dramatic scene in Dahmer’s apartment

and the shocking story that unfolded; how forensics and old-fashioned police work identified the victims; the mind of Dahmer—the

boy who decapitated a dog and nailed its head on a stake; the personal stories of the victims’ families; the riveting trial; why

Dahmer wasn’t stopped sooner; his life sentence and his murder in prison. With exclusive access to the police, detectives,

medical examiner, attorneys, psychiatrists, prosecutors, and judges involved, she reveals the complete, inside story of the case

and what happened in its wake.