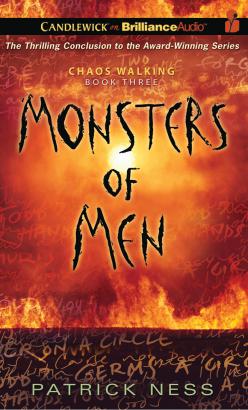 “This is science fiction at its best, and is a singular fusion of brutality and idealism that is, at last, perfectly human.” — Booklist (starred review)

As a world-ending war surges around them, Todd and Viola face monstrous decisions. The indigenous Spackle, thinking and acting as one, have mobilized to avenge their murdered people. Ruthless human leaders prepare to defend their factions at all costs, even as a convoy of new settlers approaches. And as the ceaseless Noise lays all thoughts bare, the projected will of the few threatens to overwhelm the desperate desire of the many. The consequences of each action, each word, are unspeakably vast: To follow a tyrant or a terrorist? To save the life of the one you love most, or thousands of strangers? To believe in redemption, or assume it is lost? Becoming adults amid the turmoil, Todd and Viola question all they have known, racing through horror and outrage toward a shocking finale.

An alright end to the series. The ending left a bit to be desired and almost felt rushed. Not giving the reader enough time to breath and digest as things are happening. I'd reccomend quickly reading the short story snowscape to get a tiny bit more closure. Its a short 35 page story. And worth it if you want a more definitive ending.

A nice ending to the trilogy! I laughed out loud and I shed a few tears. I’m left wondering what will happen in the future to the characters! I’m craving a 4th book!