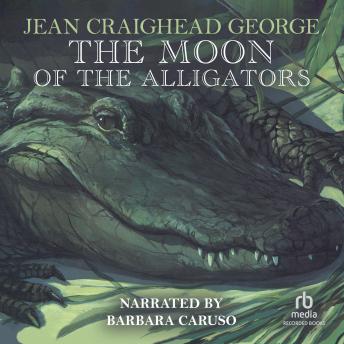 The Moon of the Alligators

This is the story of one alligator and her desperate search for food during the dry season in the Florida Everglades. It is also the story of a threatened species, the American alligator, and of its beautiful endangered homeland. In Thirteen Moons-a spellbinding wildlife series-Newbery Award-winning author Jean Craighead George has captured thirteen North American animals in their natural environments and chronicled their fight for survival. From the lush Mexican highlands to the snowy Alaskan tundra, this series explores the intricate relationships among animals, plants, and the ever-changing environment in which they live. A favorite of adults and children alike, George's entertaining and educational tales of nature alive and in action-Julie, Shark Beneath the Reef and Julie of the Wolves -have thrilled listeners for a generation. Barbara Caruso's inspired narration captures the vitality of life in the wild, and will leave you rooting for the alligator's survival.