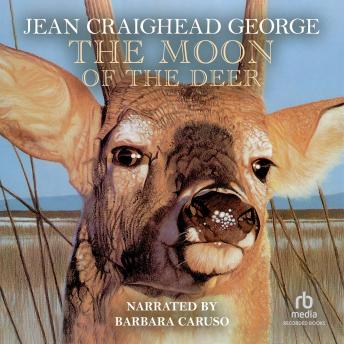 The Moon of the Deer

As mating season nears, a young white-tailed buck knows to win a mate, he must fight other males. While striving to continue its species, the young deer must also weather a fierce September hurricane which temporarily disrupts life in the fertile Mamacoke Marsh. In Thirteen Moons-a spellbinding wildlife series-Newbery Award-winning author Jean Craighead George has captured thirteen North American animals in their natural environments and chronicled their fight for survival. From the lush Everglades to the snowy Alaskan tundra, this series explores the intricate relationships among animals, plants, and the ever-changing environment in which they live. A favorite of adults and children alike, George's entertaining and educational tales of nature alive and in action-Julie, Shark Beneath the Reef and Julie of the Wolves -have thrilled listeners for a generation. Barbara Caruso's inspired narration captures the vitality of life in the wild, and the awesome power of untamed nature.