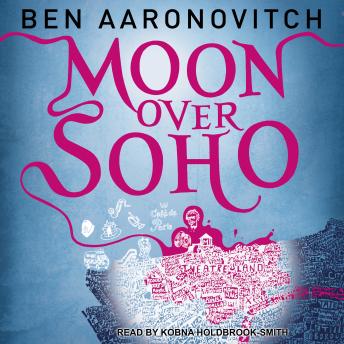 #2 of Rivers of London

Body and soul. The song. That's what London constable and sorcerer's apprentice Peter Grant first notices when he examines the corpse of Cyrus Wilkins, part-time jazz drummer and full-time accountant, who dropped dead of a heart attack while playing a gig at Soho's 606 Club. The notes of the old jazz standard are rising from the body-a sure sign that something about the man's death was not at all natural but instead supernatural.Body and soul-they're also what Peter will risk as he investigates a pattern of similar deaths in and around Soho. With the help of his superior officer, Detective Chief Inspector Thomas Nightingale, the last registered wizard in England, and the assistance of beautiful jazz aficionado Simone Fitzwilliam, Peter will uncover a deadly magical menace-one that leads right to his own doorstep and to the squandered promise of a young jazz musician: a talented trumpet player named Richard 'Lord' Grant-otherwise known as Peter's dear old dad.

Peter Grant, Patrol Constable and apprentice Wizard with the Metropolitan Police, is called in by Dr. Walid to listen to a corpse. Cyrus Wilkinson, jazz musician by night and accountant by day, died suddenly, right after a performance, apparently of natural causes. However, in the process of doing the postmortem, Walid hears a song. He recognizes it as jazz, but jazz isn't his thing, and it is, if not Peter's, at least his father's. Richard Grant, nicknamed "Lord" Grant by his fellow musicians, stood on the brink of becoming a jazz legend twice, and managed to destroy his own career both times. Peter has grown up with jazz. He recognizes the song as "Body and Soul," but can't identify the musician. The fact that this remnant of music is clinging to the body, though, means that some really powerful magic was involved in Wilkinson's death. There's a killer out there, using magic, and he has to be caught. That means it's Peter's business, or rather the Folly's, which means--Peter and his boss, Thomas Nightingale. Peter turns to his father to identify the musician playing the song. Then he goes doing normal police legwork into the background and associates of the dead man, and looking for signs of similar unexpected but seemingly natural deaths, specifically among jazz musicians. No one is going to let him dig up corpses to test for vestigia of magic, so--more legwork. He meets Simone, Cyrus Wilkinson's ex-lover, and his band, and is summoned to another death that looks remarkably like Cyrus's. As the band members realize that Peter is "Lord" Grant's son, and the police officer investigating their bandmate's death, they become happy to help with whatever information they can provide. Oh, and they'd like to meet "Lord" Grant, if convenient. But beyond that relatively positive development, there's that other death, followed by yet another, by a different means. A man is found dead sitting on a toilet in a another music club, bled to death after his penis was bitten off in what appears to be a second instance of an attack by a woman with teeth in her vagina. Before long, Peter is hunting a Pale Lady (a death avatar), possible "jazz vampires," sucking the life force out of, for some reason, specifically jazz musicians. Peter also learns some, let's say startling, things about both Thomas Nightingale, and the Folly's housekeeper, Molly. This is also the book where Peter meets Abigail Kamara. A tiny, unimportant detail, in this book. It's an interesting and complex mystery, and we get better acquainted with Peter, his friends and family, and his world. Recommended. I bought this audiobook.

Great book, just as good as the first one

This title is due for release on September 28, 2012
We'll send you an email as soon as it is available!