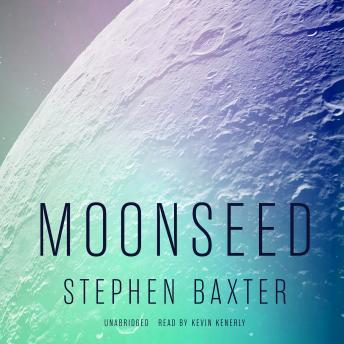 It started the night Geena and Henry broke up. What was that strange light in the sky? A new star? A comet? Neither. It was the death of Venus.

As if to commemorate the end of NASA's golden couple, our neighbor planet exploded into a brilliant cloud of dust and debris, showering the Earth with radiation and bizarre particles as big as bacteria-a ten-dimensional superstring nanovirus that literally eats rock, transforming it into liquid, and then into molecule-size black holes that devour the very fabric of spacetime.

Feasting on Edinburgh's primeval basalt, Moonseed is steadily eating its way toward Earth's core. The death toll rises by the hour as buildings collapse into streets that flow like water, as hundred-foot tsunamis obliterate Seattle and Vancouver, and as volcanoes sprout like weeds across the planet's quickly decaying mantle.

NASA "rock-jockey" Henry Meacher and his Japanese colleague, Blue, race to cut off the virus and save what is left of the Earth. Meanwhile Henry's ex, Geena, straps in with a Russian cosmonaut for a daredevil Moon voyage, ultimately reuniting with Henry and searching for the lunar ice deposits that might make possible the greatest evacuation since Noah braved the Flood.

And a mother and her young son clamber for the last solid ground in the liquefying Scottish Highlands, under the baleful stars of a dying universe ...

Audacious beyond comparison, grand in conception, and gripping in execution, Moonseed is the first modern novel to do justice to the awesome terror and promise implicit in quantum physics. Like all of Baxter's work, it blazes new paths from which science fiction will surely follow in the years to come, and becomes required listening for anyone wishing to understand the awesome promise-and threat-revealed by modern science.