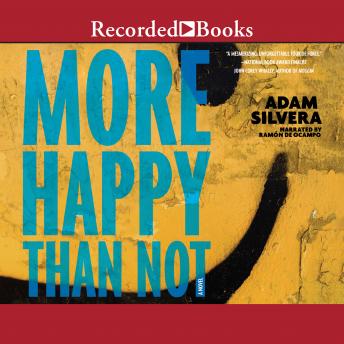 More Happy Than Not

Happiness shouldn't be this hard. When it first gets announced, the Leteo Institute's memory-alteration procedure seems too good to be true to Aaron Soto - miracle cure-alls don't tend to pop up in the Bronx projects. Aaron can't forget how he's grown up poor, how his friends all seem to shrug him off, and how his father committed suicide in their one bedroom apartment. He has the support of his patient girlfriend, if not necessarily his distant brother and overworked mother, but it's not enough. Then Thomas shows up. He doesn't mind Aaron's obsession over the Scorpius Hawthorne books and has a sweet movie set-up on his roof. There are nicknames. Aaron's not only able to be himself, but happiness feels easy with Thomas. The love Aaron discovers may cost him what's left of his life, but since Aaron can't suddenly stop being gay Leteo may be the only way out.

This book is a crazy ride. I had a hard time rating it but will say the choice for narrarator was awful. He wasn’t awful, but far far too old for the character which made the book harder to enjoy. I believe I would have liked it better had I read it and not listened to it.