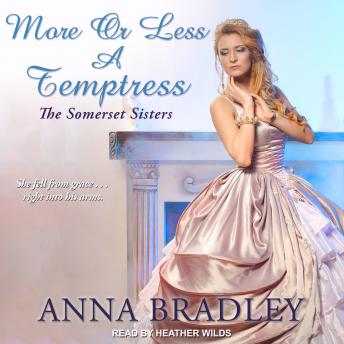 More or Less a Temptress

A beautiful debutante in Regency London seems destined to make a good match. But the Somerset sisters have made courtship and matrimony a deliciously scandalous affair . . .

Hyacinth Somerset's debut is the most anticipated event of the season, as it will be the reclusive young lady's first public appearance. But within moments of being asked to dance by a dashing stranger, Hyacinth calls him a murderer, then faints dead away! Now all the ton is a aflutter over Hyacinth's baffling shun of their most intriguing newcomer-the wildly handsome Lachlan Ramsey . . .

Recently arrived from Scotland, Lachlan only wishes to claim his place in society to secure his sister's future. When that is threatened by the accusations of a hapless slip of a girl, he will do anything to protect his family. Yet it appears Hyacinth has only damaged her own hopes, inspiring the label of hysteric-and ultimately inspiring Lachlan to shelter her from harm. Now if only there were a defense for the surge of feeling he has every time Hyacinth turns her gaze his way. If only there were a way to make her his-while keeping the true secret in his past from destroying everything-and everyone-he cares about . . .

More or Less a Temptress