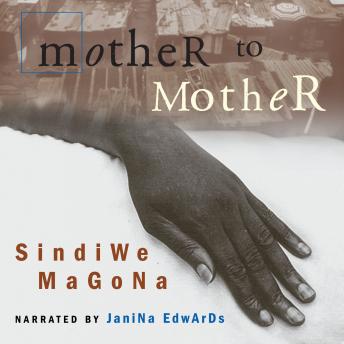 Sindiwe Magona's novel Mother to Mother explores the South African legacy of apartheid through the lens of a woman who remembers a life marked by oppression and injustice. Magona decided to write this novel when she discovered that Fulbright Scholar Amy Biehl, who had been killed while working to organize the nation's first ever democratic elections in 1993, died just a few yards away from her own permanent residence in Guguletu, Capetown. She then learned that one of the boys held responsible for the killing was in fact her neighbor's son. Magona began to imagine how easily it might have been her own son caught up in the wave of violence that day. The book is based on this real-life incident, and takes the form of an epistle to Amy Biehl's mother. The murderer's mother, Mandisi, writes about her life, the life of her child, and the colonized society that not only allowed, but perpetuated violence against women and impoverished black South Africans under the reign of apartheid. The result is not an apology for the murder, but a beautifully written exploration of the society that bred such violence.

This title is due for release on August 21, 2018
We'll send you an email as soon as it is available!