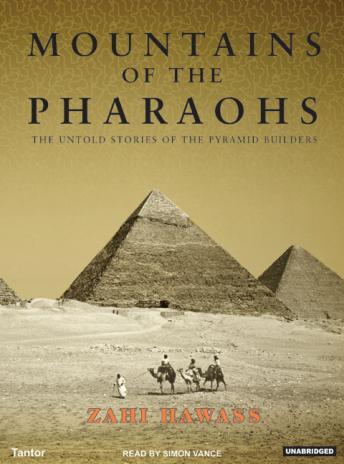 Mountains of the Pharaohs: The Untold Story of the Pyramid Builders

An unprecedented account of one of civilization's greatest achievements.

The great pyramids of Giza have intrigued humanity for thousands of years. Questions about the construction and the purpose of these majestic monuments have existed since the middle period of ancient Egyptian civilization; in the sixth century B.C., Herodotus was the first of generations of explorers to travel to Egypt in an attempt to unlock their secrets. Recent cutting-edge research has uncovered information about how and why they were built unimaginable to previous generations. In Mountains of the Pharaohs, Zahi Hawass, a world-renowned archaeologist and the official guardian of Egypt's timeless treasures, weaves the latest archaeological data and an enthralling family history into spellbinding narrative.

Nearly five thousand years ago, the fourth dynasty of Egypt's Old Kingdom reigned over a highly advanced civilization. Believed to be gods, the royal family lived amidst colossal palaces and temples built to honor them and their deified ancestors. Hawass brings these extraordinary historical figures to life, spinning a soap opera-like saga complete with murder, incest, and the triumphant ascension to the throne of one of only four queens ever to rule Egypt.

The magnificent pyramids attest not only to the dynasty's supreme power, but also to the engineering expertise and architectural sophistication that flourished under their rule. Hawass argues that the pyramids-including the Great Pyramid of Khufu, the only one of the Seven Wonders of the World still standing-were built by skilled craftsman who took great pride in their work.

Describing pyramids without pictures may be impossible. This book seemed repetitive and, for us, was too dull to finish.

I was hoping to learn more about the stories behind the pyramids. It was pretty boring - I didn't finish.

Boring. It only touches on what is known about the building on the pyramids

Unless you have pen and paper in hand to write all the names down, you couldn't possibly follow the history. Very dry and full of detail that doesn't add to an overall understanding of the people and their times. I am listening for the second time The Teaching Company's "The History of Ancient Egypt" as delivered by Professor Bob Brier. It is positively outstanding and a must for anyone interested in Egyptology. Totally understandable by the lay-person, artfully constructed, and masterfully delivered. I could never tire of listening to these lectures.

God this was awful. Unless you are an archaeologist or obsessed with Egyptian history this book is not for you. Not even good for general history buffs.

This title is due for release on September 5, 2006
We'll send you an email as soon as it is available!