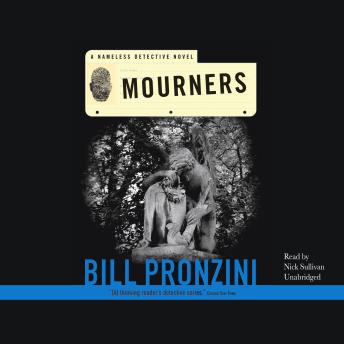 #31 of The Nameless Detective Novels

Nameless had seen enough death in his years; spending his time watching someone drive to several funerals a day, funerals for people he didn't know, was more than he could take. And he had a non-professional problem of his own: his relationship with his wife, Kerry, had hit a wall, and nothing he did got him over it and to the other side. There was one possibility, one thing he'd done (or not done), but knowing that didn't seem to help. Also not helping was the mood in the office. Tamara had something eating at her and Jake, well, Jake needed a case so he could stop thinking about what was happening with his son. It was a mournful time for everyone.

Then the bits and pieces began to fall into place: The funerals James Troxell was attending were all for women who had died violently. Was he responsible? One woman thought Troxell had killed her sister, and her insistence was becoming a problem.

Too many deaths, too many roads leading nowhere, too many crimes and secrets and fears were coming together as heavy as the fog rolling over the Bay. Too many answers were needed before there'd be sunshine again for anyone and the mourning could stop.

This title is due for release on February 1, 2006
We'll send you an email as soon as it is available!