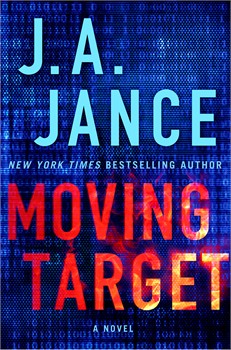 Lance Tucker, an incarcerated juvenile offender and talented hacker in his own right, is set on fire one night and severely burned while hanging Christmas decorations in a lockup rec room. B. Simpson, Ali Reynolds’s fiancé and the man who helped put Lance in jail, feels obliged to get to the bottom of what happened. With Ali off in England to help Leland Brooks at a reunion with his long-estranged family, B. turns to someone else to help out—Ali’s good friend and Taser-carrying nun, Sister Anselm.

Meanwhile, in Bournemouth—Leland’s hometown—Ali begins to investigate the decades-old murder of Leland’s father, which Leland himself was once suspected of committing. With unsolved murders on both sides of the Atlantic, Ali, B., and Sister Anselm are united by their search for answers—and the jeopardy they get into as a result.

From the author praised for her “inimitable, take-no-prisoners style” (Kirkus Reviews), Moving Target sends Ali on a trans-Atlantic adventure and straight into the path of a deadly killer.