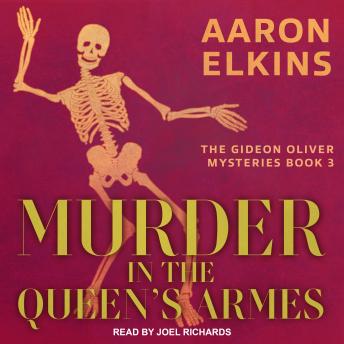 Murder in the Queen's Armes

The Skeleton Detective puzzles over the theft of an ancient bit of bone-and a student's murder-in this novel by the Edgar Award-winning author of Switcheroo.

Anthropology professor Gideon Oliver would prefer to keep his mind on his beautiful new bride Julie during their English honeymoon, but one intrusive question will not stop nagging at him: Who would want to steal a thirty-thousand-year-old parieto-occipital calvarial fragment?

Yet someone has lifted this chunk of prehistoric human skull from a musty museum in Dorchester. Then, thirty miles away, an archaeology student is murdered, increasing tension and suspicion at a dig that had already seethed with suspicion, rivalry, and mistrust. Could there be a connection between a hot bone and a cold-blooded murder? Gideon is called on by the police to apply the unique skills for which the media have named him 'the Skeleton Detective,' and he reluctantly agrees. Before he is done, his sleuthing will lead him to another murder and will-in the most literal and terrifying manner imaginable-sic the dogs on him, putting Gideon himself, and Julie as well, in mortal danger . . .

Murder in the Queen's Armes is a suspenseful, fun-filled whodunit by the author of the Alix London and Chris Norgren series-a celebrated master who 'thoroughly understands the art of the murder mystery' (The Philadelphia Inquirer).