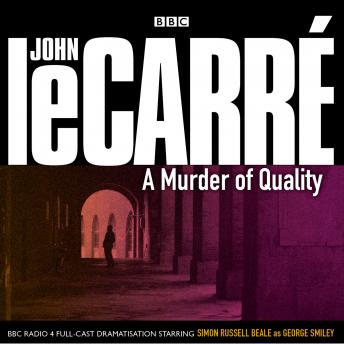 A Murder of Quality

George Smiley is one of the most brilliantly realised characters in British fiction. Bespectacled, tubby, eternally middle-aged and deceptively ordinary, he has a mind like a steel trap and is said to possess ‘the cunning of Satan and the conscience of a virgin’. This dramatisation, set in the early 1960s, sees George Smiley investigating a murder in a public school. When the wife of one of the masters is found bludgeoned to death, Smiley, out of loyalty to an old friend, agrees to look into the case. But his investigation raises a multitude of questions. Who could have hated Stella Rode enough to kill her? Why was her dog put down shortly before the murder? And what did Mad Janie see on that fatal night? To discover the truth, Smiley must lift the lid on a world of hidden passions and dangerous hatreds... Starring the award-winning Simon Russell Beale as Smiley, and with a distinguished cast including Geoffrey Palmer and Marcia Warren, this tense, compelling dramatisation perfectly captures the atmosphere of le Carré’s gripping, sophisticated thriller.