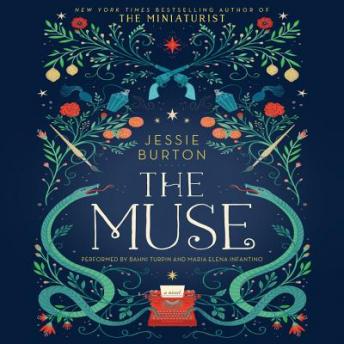 The Muse: A Novel

From the #1 internationally bestselling author of The Miniaturist comes a captivating and brilliantly realized story of two young women—a Caribbean immigrant in 1960s London, and a bohemian woman in 1930s Spain—and the powerful mystery that ties them together.

England, 1967. Odelle Bastien is a Caribbean émigré trying to make her way in London. When she starts working at the prestigious Skelton Institute of Art, she discovers a painting rumored to be the work of Isaac Robles, a young artist of immense talent and vision whose mysterious death has confounded the art world for decades. The excitement over the painting is matched by the intrigue around the conflicting stories of its discovery. Drawn into a complex web of secrets and deceptions, Odelle does not know what to believe or who she can trust, including her mesmerizing colleague, Marjorie Quick.

Spain, 1936. Olive Schloss, the daughter of a Viennese Jewish art dealer and an English heiress, follows her parents to Arazuelo, a poor, restless village on the southern coast. She grows close to Teresa, a young housekeeper, and Teresa’s half-brother, Isaac Robles, an idealistic and ambitious painter newly returned from the Barcelona salons. A dilettante buoyed by the revolutionary fervor that will soon erupt into civil war, Isaac dreams of being a painter as famous as his countryman Picasso.

Raised in poverty, these illegitimate children of the local landowner revel in exploiting the wealthy Anglo-Austrians. Insinuating themselves into the Schloss family’s lives, Teresa and Isaac help Olive conceal her artistic talents with devastating consequences that will echo into the decades to come.

Rendered in exquisite detail, The Muse is a passionate and enthralling tale of desire, ambition, and the ways in which the tides of history inevitably shape and define our lives.

The book was beautifully written as I would expect from jessie Burton- she is a wonderful writer. I loved the story, or at least tried my very best to enjoy it, but this was seriously marred by one of the co-narrators, Maria Elena Infantino. I have listened to probably 100+ audiobooks and I haven't always connected to the narrators of all of them, but never to the extent that I felt compelled to express this in the form of a review. Her narration was overly-dramatic, with constant and misplaced pauses, with a strange forced cadence, rising and falling in all the wrong places. Every character that she spoke for came across as overly aggressive, excitable, and rather superficial. When she first began speaking I thought it might be a temporary very dramatic moment, but as it continued I realised that this was the narration style and my heart sank. This definitely impacted negatively on my experience of the book, and on my gaining a feeling for the characters set in the 1936 period. They all felt very wooden and unlikeable, and quite inaccessible. I do not think this was what Jessie Burton intended, and I feel sad for her that this was the outcome. On the other hand Bahni Turpin narrated beautifully, and I felt she did Jessie Burton's work justice.

It took me awhile to get into this story, particularly when it changed narrators...they are so very different. But once I adapted to the changes, it was a good story that I enjoyed very much.