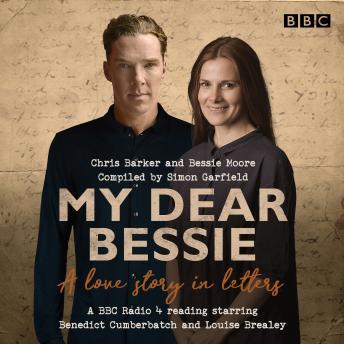 My Dear Bessie: A Love Story in Letters: A BBC Radio 4 adaptation

Benedict Cumberbatch and Louise Brealey read a love story in letters, played out against the backdrop of the Second World War.

‘Can you feel, as you read these words, that I am thinking of you now; aglow, alive, alert at the thought that you are in the same world, and by some strange chance loving me.’

A small blue box opened in 2008 revealed a wartime world of love, longing and frustration. Inside were bundles and bundles of letters written neatly in pen, in pencil, on thin blue airmail paper or headed army notepaper. Envelopes covered in postmarks, redirections, censor’s stamps. A love affair in letters, between two people who barely knew each other, thousands of miles apart, in the middle of a war, with no idea when or whether they will ever see each other again.

On September 5th 1943, Chris Barker, a signalman stationed near Tobruk in North Africa, decided to write to a former work colleague, Bessie Moore, a Morse code interpreter at the Foreign Office back in London. The unexpected warmth of Bessie's reply changed their lives forever.

Chris and Bessie's love letters first appeared in Simon Garfield's book To The Letter. They toured literary festivals as part of Letters Live before being published in a book, My Dear Bessie.

This title is due for release on March 1, 2018
We'll send you an email as soon as it is available!