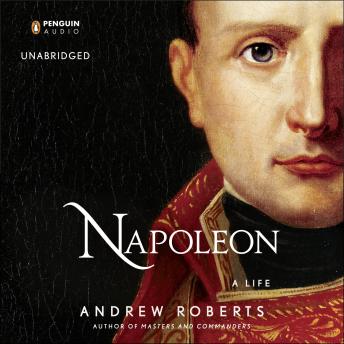 Austerlitz, Borodino, Waterloo: his battles are among the greatest in history, but Napoleon Bonaparte was far more than a military genius and astute leader of men. Like George Washington and his own hero Julius Caesar, he was one of the greatest soldier-statesmen of all times.

Andrew Roberts’s Napoleon is the first one-volume biography to take advantage of the recent publication of Napoleon’s thirty-three thousand letters, which radically transform our understanding of his character and motivation. At last we see him as he was: protean multitasker, decisive, surprisingly willing to forgive his enemies and his errant wife Josephine. Like Churchill, he understood the strategic importance of telling his own story, and his memoirs, dictated from exile on St. Helena, became the single bestselling book of the nineteenth century.

An award-winning historian, Roberts traveled to fifty-three of Napoleon’s sixty battle sites, discovered crucial new documents in archives, and even made the long trip by boat to St. Helena. He is as acute in his understanding of politics as he is of military history. Here at last is a biography worthy of its subject: magisterial, insightful, beautifully written, by one of our foremost historians.

Napoleon is certainly a very interesting person, and I like history immensely, so I expected to enjoy this audiobook . HOWEVER, the narrator destroyed this audiobook for me. Very frequently, he lowered the volume of his voice at the end of sentences — so I could not hear what is usually the most critical word in a sentence. Perhaps this affectation is common in French (as is similarly done with the last syllable of a word), but I found it intolerable. To understand the audiobook, I could turn the volume up to the level of pain or ignore an important sentence. After a few hours of frustration, I chose neither option. I turned it off and found another book.

An epic life read by an exceptional narrator!

The book was great. No doubt one of the most remarkable lives.

This book just might be the most faithful account of Napoleon's life story. The author does an excellent job of recounting Napoleon's campaigns and personal struggles in a fair and balanced way. I highly recommend this book to any history buff.

This is a very in depth account of Napoleon's rise and fall encompassing the personal, social, political, military, fiscal, religious, and geographic analysis of the man and his times. Anyone interested in European history must include this book. Love this narrator as well.

Essential reading. By far the most well researched and well written account!

Well researched and based on primary sources such as letters, newspaper articles, proclamations and so forth. Written in an engaging style and well read.

A fabulous book. Meticulously researched [the author visited all of the Battlefields and his lively narrative reflected his observations.