Natural Disaster: I Cover Them. I Am One. 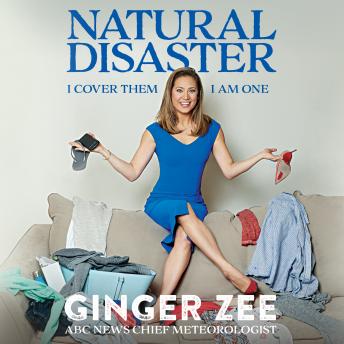 ABC News chief meteorologist Ginger Zee pulls back the curtain on her life in Natural Disaster. Ginger grew up in small-town Michigan where she developed an obsession with weather as a young girl. Ginger opens up about her lifelong battle with crippling depression, her romances that range from misguided to dangerous, and her tumultuous professional path. This cyclone of stories may sound familiar to some—it's just that Ginger's personal tempests happened while she was covering some of the most devastating storms in recent history, including a ferocious tornado that killed a legend in the meteorology field.

This book is for all the mistake makers who have learned to forgive others and themselves—even in the aftermath of man-made, or in this case Zee-made, disasters. It's a story that every young woman should read, a story about finding love and finding it in yourself.

Beloved by Good Morning America's audience, Ginger is a daily presence for millions. Zee's gained fame for her social media presence which is as unfiltered as Natural Disaster—from baby barf to doggy doo-doo. She's shattered the glass ceiling for women in meteorology, but admits here first, she's the one natural disaster she couldn't have forecast.

Natural Disaster: I Cover Them. I Am One.