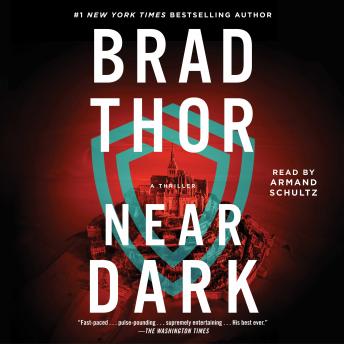 Near Dark: A Thriller

#19 of The Scot Harvath Series

“This might be the single greatest thriller I’ve covered....It’s amazing!” —The Real Book Spy

The world’s largest bounty has just been placed upon America’s top spy. His only hope for survival is to outwit, outrun, and outlast his enemies long enough to get to the truth.

But for Scot Harvath to accomplish his most dangerous mission ever—one that has already claimed the lives of the people closest to him, including his new wife—he’s going to need help—a lot of it.

Not knowing whom he can trust, Harvath finds an unlikely ally in Norwegian intelligence operative Sølvi Kolstad. Just as smart, just as deadly, and just as determined, she not only has the skills, but also the broken, troubled past to match Harvath’s own.

I feel I’ve done my penance for the year

Thor's Harvath books have become bogged down in themselves. Having read all of them to this point, I was hopeful that Backlash had sparked a turning point in his writing. That was a great book with an imaginative plot that was new and inventive. But then Near Dark immediately returned to the methodical and re-tread narratives that are unimaginative and so heavily redundant with past books. It seems to me that at this point approximately 23% of each Thor book is a summary of his past books, with pages upon pages of backstory and flashbacks and anecdotes that seem like nothing more than filler. Maybe I've just read too many of them because at this point they are blending together.

This is a slower paced, over detailed Mitch Rapp novel.

superb as I have found most of Brad thors books

Great book, I look forward to reading Brad's books and adding them to my collection.