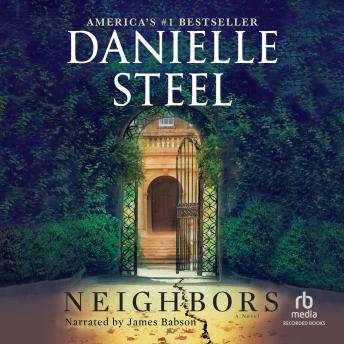 In Danielle Steel's gripping new novel, a reclusive woman opens up her home to her neighbors in the wake of a devastating earthquake, setting off events that reveal secrets, break relationships apart, and bring strangers together to forge powerful new bonds.

Meredith White was one of Hollywood's most recognizable faces. But a personal tragedy cut her acting career short and alienated her from her family. For the last fifteen years, Meredith has been living alone in San Francisco with two trusted caretakers. Then, on a muggy late summer day, a massive earthquake strikes Northern California, plunging the Bay Area into chaos. Without a moment's hesitation, Meredith invites her stunned and shaken neighbors into her mostly undamaged home as the recovery begins.

These people did not even realize that movie star Meredith White was living on their street. Now, they are sharing her mansion, as well as their most closely kept secrets. Without the walls and privacy of their own homes, one by one, new relationships are forged. For every neighbor, there is a story, from the doctor whose wife and children fear him, to the beautiful young woman dating a dishonorable man, to the aspiring writer caring for a famous blind musician.

In the heart of the crisis, Meredith finds herself venturing back into the world. And thanks to the suspicions and dogged detective work of a disaster relief volunteer, a former military officer named Charles, a shocking truth about her own world is exposed. Suddenly Meredith sees her isolation, her estranged family, and even her acting career in a whole new light.

Filled with powerful human dramas, Neighbors is a penetrating look at how our world can be upended in a moment. In a novel of unforgettable characters and stunning twists, acts of love and courage become the most powerful forces of all.

I always enjoy books by Danielle Steel and this one did not disappoint. I couldn’t put it down and listened to it in one day!

Was entertaining and enjoyable!

Only ok. Not as good as a man called Ove

Not a fan of this book.

I have completely read the entire book, but so far the ap is super easier and the narrative isn’t as monotone as I expected. Loving the experience.