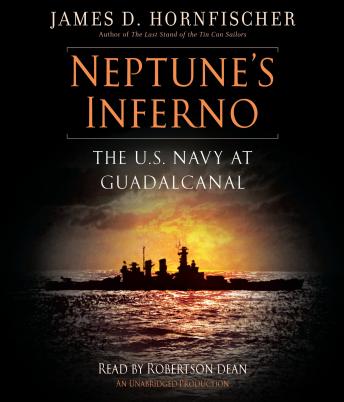 With The Last Stand of the Tin Can Sailors and Ship of Ghosts, James D. Hornfischer created essential and enduring narratives about America’s World War II Navy, works of unique immediacy distinguished by rich portraits of ordinary men in extremis and exclusive new information. Now he does the same for the deadliest, most pivotal naval campaign of the Pacific war: Guadalcanal.

Neptune’s Inferno is at once the most epic and the most intimate account ever written of the contest for control of the seaways of the Solomon Islands, America’s first concerted offensive against the Imperial Japanese juggernaut and the true turning point of the Pacific conflict. This grim, protracted campaign has long been heralded as a Marine victory. Now, with his powerful portrait of the Navy’s sacrifice—three sailors died at sea for every man lost ashore—Hornfischer tells for the first time the full story of the men who fought in destroyers, cruisers,  and battleships in the narrow, deadly waters of “Ironbottom Sound.” Here, in brilliant cinematic detail, are the seven major naval actions that began in August of 1942, a time when the war seemed unwinnable and America fought on a shoestring, with the outcome always in doubt. But at Guadalcanal the U.S. proved it had the implacable will to match the Imperial war machine blow for violent blow.

Working from new interviews with survivors, unpublished eyewitness accounts, and newly available documents, Hornfischer paints a vivid picture of the officers and enlisted men who took on the Japanese in America’s hour of need: Vice Admiral William “Bull” Halsey, who took command of the faltering South Pacific Area from his aloof, overwhelmed predecessor and became a national hero; the brilliant Rear Admiral Norman Scott, who died even as he showed his command how to fight and win; Rear Admiral Daniel Callaghan, the folksy and genteel “Uncle Dan,” lost in the strobe-lit chaos of his burning flagship; Rear Admiral Willis Lee, who took vengeance two nights later in a legendary showdown with the Japanese battleship Kirishima; the five Sullivan brothers, all killed in the shocking destruction of the Juneau; and many others, all vividly brought to life.

The first major work on this essential subject in almost two decades, Neptune’s Inferno does what all great battle narratives do: It cuts through the smoke and fog to tell the gripping human stories behind the momentous events and critical decisions that altered the course of history and shaped so many lives. This is a thrilling achievement from a master historian at the very top of his game.

Well researched, well organized, and well told story of a conflict which should never be forgotten. Complete with mistakes made, real and perceived.

A well-written account if WWII naval action that provides a thrilling view into the calculations of senior commanders and an exciting and real understanding of the anxieties, motivations and experiences of those in the fight— the Admiral, Captain, and seaman alike. Well read by Dean, whose voice captures the moment without distracting melodrama.

This title is due for release on January 25, 2011
We'll send you an email as soon as it is available!