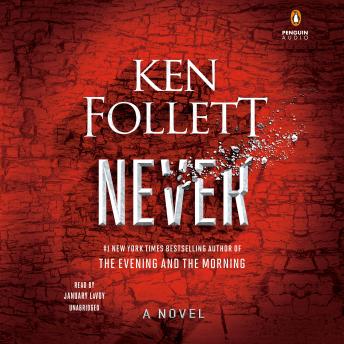 The new must-read epic from master storyteller Ken Follett: more than a thriller, it’s an action-packed, globe-spanning drama set in the present day.

“Every catastrophe begins with a little problem that doesn’t get fixed.” So says Pauline Green, president of the United States, in Follett’s nerve-racking drama of international tension.

A shrinking oasis in the Sahara Desert; a stolen US Army drone; an uninhabited Japanese island; and one country’s secret stash of deadly chemical poisons: all these play roles in a relentlessly escalating crisis.

Struggling to prevent the outbreak of world war are a young woman intelligence officer; a spy working undercover with jihadists; a brilliant Chinese spymaster; and Pauline herself, beleaguered by a populist rival for the next president election.

Never is an extraordinary novel, full of heroines and villains, false prophets and elite warriors, jaded politicians and opportunistic revolutionaries. It brims with cautionary wisdom for our times, and delivers a visceral, heart-pounding read that transports readers to the brink of the unimaginable.

Have enjoyed many of Follett’s in the past but this was a waste of 24 hours. Many disjointed storylines that ran parallel but never intersected. Characters were certainly whinny and immature.

Wow, this was really really bad. Ken, you can stop writing now, you have lost your talent. I want my money back. (Hard to rate narration when the content is such garbage.)

This is not necessary Ken Follett's best book. But it's definitely his most important one! With avery powerful message!

I didn't sleep well the night I finished this book: It was all too plausible. While I agree with who note that some of the plot lines don't intersect, it's my hope tjis was the first book in another trilogy.

Unrelated illegal immigrant subplot took up half the book. Too much of it written like a romance novel. Shell of a Follett book.

As always, Mr Follet allows for amazing evasion through his colourful words, stories and plots. With simplicity, he manages to dive you into whatever story he's telling in a way that makes you feel part of it. Wether it be a Chinese secret agent, or an Arab spy in the Sahel desert - you can sense the cultural differences - taste the far away lands through his accurate depictions, and get a feel of politics, religious differences and foreign relations without getting bored out of your socks!! Chapeau !

I find it hard to believe this was written by Ken Follett. Very disappointing book

Never has "The End" had more weight to it than when January LaVoy says it at the close of this book. Hard to think about, but important and well-written. As always, January LaVoy is absolutely masterful with her characterizations.

Ken Follet never disappoints. This is one of those books that you can't wait to find out what happens next. As usual Mr. Follet weaves a story with different story lines that all intertwine. His characters are realistic and are multi-dimensional. Keep them coming Mr. Follet, you have not disappointed me yet. I was surprised to hear a female narrator, but she was fantastic.

Very well written and highly descriptive. I was left aching to know what happens next throughout the whole book. The narrator was perfect, with the dialect and accents changing accordingly. If I closed my eyes, her voice would play a movie in my head.

Cannot stop this book is like so many other Ken Follet books!

Tremendous writer and my favourite narrator